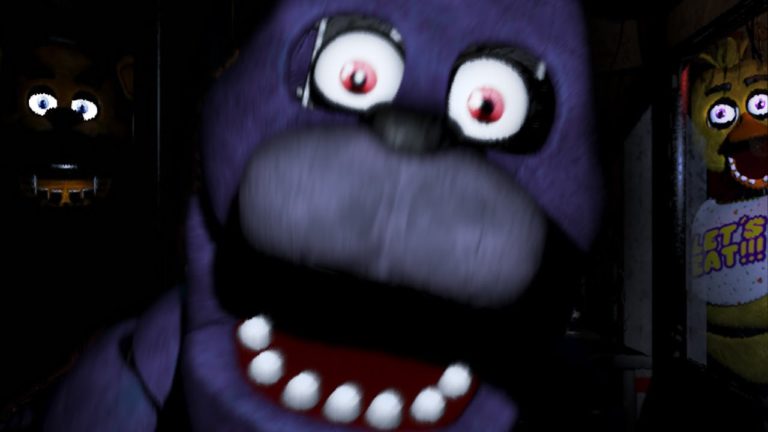 An ongoing point of contention within the gaming community is the “cinematic experience” big-budget titles tend to strive for – that is, attempting to recreate filmic storytelling in interactive form. This is often deemed a fruitless exercise, as video games are still regarded by many critics as cinema’s considerably less intelligent younger cousin. However, an increasing number of developers are crafting games that  acknowledge and outmatch their cinematic influences at the same time – particularly in the horror genre.

One particular game released this year has been hailed as the new vanguard of the video game horror renaissance: Five Nights at Freddy’s, created by indie developer Scott Cawthon.

Five Nights became an unlikely internet sensation following its release in August 2014, sparking a wave of “Let’s Play” (gameplay accompanied by user commentary) Youtube videos and receiving thousands of downloads within weeks. The player takes the role of a hapless security guard at Freddy Fazbear’s Pizza, a crusty Chuck E. Cheese’s look-a-like with a disturbing secret: at night, the restaurant’s animatronic animal characters roam the halls with murderous intent. The game opens with a dash of dark humor, the former security guard casually relating your new occupational hazards to you via voicemail. Naturally, you’re stuck working the night shift. 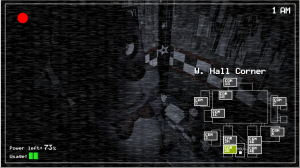 To be both off-color and completely honest, the horrific tension reaches an explosively pants-wetting level while playing this game. You cannot leave your security office. You have no weapons. Your only defenses against the haunted robotic terrors of Freddy’s Pizza are two light switches, two door locks, and the various security cameras placed throughout the restaurant. You sit, you watch, and you wait for the clock to hit 6 AM. That’s when the ‘bots shut down. That’s when you’re safe. Rinse and repeat for five nights.

And oh yes, one more thing: locking the office doors and turning the hallway lights on uses up the restaurant’s power. If you run out before sunrise, you’re dead. How does death come about in Five Nights, you may ask? The animatronics view you as a fellow machine without an animal costume, and will force you inside a spare if they catch you. Picture a Chuck E. Cheese character opening up like an iron maiden torture device. Survival is unlikely.

Five Nights hearkens back to 70’s and ‘80s horror films featuring killer dolls and robots – the Child’s Play series, the Poltergeist clown, Terminator, the androids of Michael Crichton’s oft-forgotten Westworld. The difference, of course, is that players are in control of their fate during their five nights at Freddy’s Pizza. Hiding under the blankets results in a quick, terrifying death and a Game Over screen. These mechanical demons are after your blood. Surviving all five nights and completing the game takes a scant 45 minutes, but there’s no downtime. The horror is pure, constant, unrelenting. Five Nights at Freddy’s is scarier than any film released this year.

And in fine, trashy horror tradition, the sequel’s just been released with no time to catch your breath. Who wants Freddy’s pizza?