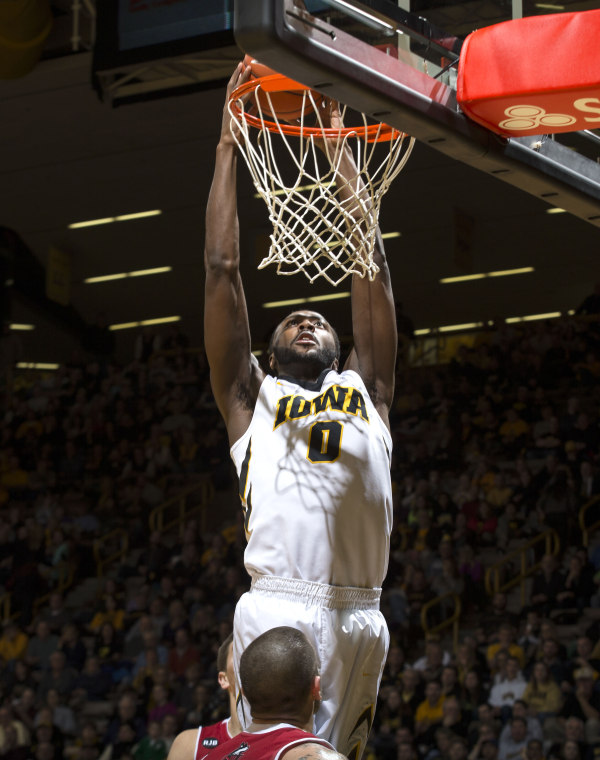 IOWA CITY- The Iowa Hawkeyes (4-2) forced a poor shooting night to top the Northern Illinois Huskies (2-1) by a score of 70-49 in front of a crowd of 14,357 on Wednesday night at Carver-Hawkeye Arena. The Iowa lead was sparked by an early 16-0 Hawkeye run, capped off by an Aaron White dunk with 11:17 remaining in the first half to give the Hawkeyes a 20-6 lead.

It was once again the Iowa defense who wrote the story for the Hawkeyes as they pulled off their second straight victory and stayed perfect at home (4-0) in the 2014 campaign.

Iowa held Northern Illinois to just 20 points in the first half on 8-of-32 shooting, including 1-of-11 from three. The Huskies shot only 28% for the game, shooting 17-of-61 from the field. NIU could not get it going early on and the shooting woes continued throughout the second half. Aaric Armstead led the Huskies with 13 points. He added seven rebounds, a block, and a steal. NIU shot 26.1% from three and finished with only eight team assissts.

“I thought we were pretty locked in,” Iowa’s head coach Fran McCaffery said of his defense, “Our offense was still not where we wanted it to be so it was absolutely critical that our defense be exactly that. Other than the 23 offensive rebounds, we played really well defensively.”

Aaron White finished with 14 (6-11) points, marking his sixth straight game in double figures this season. Anthony Clemmons had another strong game, finishing with 14 (3-6) points which tied his career best. The duo led all scorers for the game.

On Wednesday morning, the team announced that Gabriel Olaseni’s father had passed away. Gabriel decided to play despite his heart and mind being with his family and loved ones. His teammates and coaching staff surrounded him with support before and during the game.

“That’s tough. Not only for him and his family but for all of us,” Aaron White said of Olaseni. “It was hard but the best thing I can do is just be there for him and love him like a brother.”

Fran McCaffery was pleased with his teams performance, but was primarily impressed with Gabriel’s ambitions to play.

“He didn’t hesitate (to play),” said McCaffery. “One of the last things his father said was he’s so proud of Gabe and he wants him to maximize this opportunity his senior year.”

Iowa shot 46.3% from the field as a team and 29.4% from three; decent numbers, but numbers Fran McCaffery would certainly like to improve. The team pulled down 38 rebounds, dished out 16 assists, and blocked NIU 12 times.

The Hawkeyes return to Carver-Hawkeye Arena on Saturday, November 29th where they will take on Longwood at 1:00 pm.