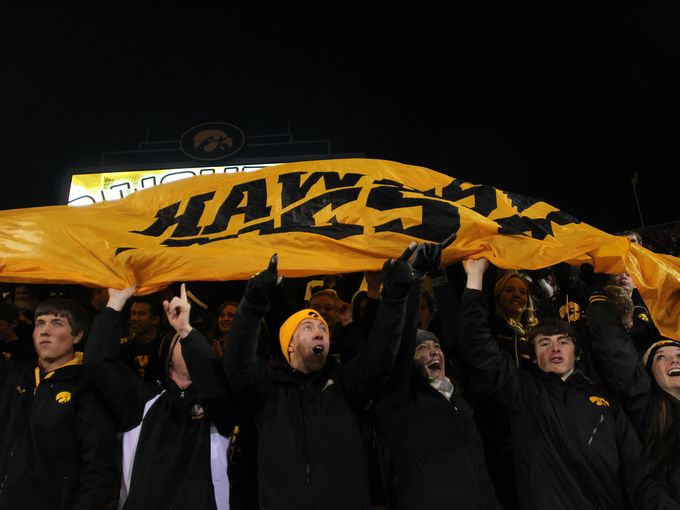 Last Wednesday, KRUI staffer Steven Elonich wrote a piece about the Kinnick Stadium crowd needing to improve. He said, “During my two years at Iowa, Kinnick Stadium hasn’t been what it was growing up,” and “Noise is down, empty seats are more apparent and boos are more common than statement victories.”

I can’t argue with him about some of that. Attendance has been down the last few years. He’s also right about the lack of statement victories at home. After the debacle of the 2012 season and the beatings taken from Wisconsin and Michigan State last year, it was fair to wonder whether Kinnick had lost some of it’s magic.

Before I continue, yes, I know the outcome, and yes, I realize we are still looking for one of those aforementioned statement wins. But from my perch up in the press box calling the game on KRUI, I saw an atmosphere I hadn’t seen in my four years as an Iowa student.

I’ve attended every game in Kinnick Stadium since the start of the 2011-2012 season. That time span has included the biggest comeback in school history against Pittsburgh in 2011, the coldest game in Kinnick Stadium history last year against Michigan, a goal line stand as time expired against Michigan in 2011, and two night games. Not one of those games could match the electricity and intensity of Saturday’s game.

I was worried about the student section being somewhat diluted with students heading home for Thanksgiving break (and if you did, shame on you for missing out on this game). That might have been true to an extent. I couldn’t see most of the student section from where I was sitting, but if it was true, it was true in numbers only. The student section is always the loudest source of noise in the stadium, and Kinnick was LOUD.

I’ve heard the stadium get loud at certain times, like the goal line stand against Michigan I mentioned above, but this crowd brought the noise the whole game. I’ve been to 29 games in Kinnick and six in Memorial Stadium in Nebraska (I’m from western Iowa), but this was the most electric and loudest crowd I’ve heard. I have only been to those two venues, but I’m willing to bet that kind of noise and electricity is rare.

Elonich wrote about the crowd needing to know the appropriate time to cheer. Saturday night’s crowd was on it from the first drive of the game. After seeing the naughty things Melvin Gordon did to Nebraska a week ago, the crowd erupted every time he was bottled up for a short gain.

It was obvious that the defense noticed this too. It seemed every time Gordon was wrapped up, there were 11 black jerseys hustling over to join in the pile, driving that pile back 10 yards, celebrating as a unit, and then immediately pointing to the crowd, begging them to keep up the energy.

It worked on the crowd, and it worked on me. After Iowa scored its first touchdown and converted the two-point conversion to make it a one-score game, Greg Mabin made a stop behind the line, and I yelled out in the press box. Jeremy Mayer, who was doing the play-by-play with me had to motion for me to quiet down since we weren’t supposed to be loud in the press box.

I couldn’t help but get overly excited as I looked down over a blacked out Kinnick Stadium illuminated by the lights under the clear night sky for the first time in two years (Side note: Kinnick Stadium is a top three Big Ten venue under the lights.  Get us a night game Delaney).  Watching the crowd rise to its feet for every critical moment was enough to give me goosebumps.  It’s what made the ending of the game even harder to swallow.

Everyone in black and gold, players, coaches, fans, cheerleaders, and band members gave everything they had with the goal of celebrating an Iowa win. They made Wisconsin have to play its best game and Joel Stave have to have a career day to win, and credit them for doing it.

I know there are no such thing as moral victories, and this season hasn’t been the magical one we all dreamed about when the schedule came out.  Iowa fans have voiced frustration, anger, and sadness this year.  Saturday’s game probably leaned more towards sadness, but Iowa fans should also feel a sense of pride.

When the division was on the line and the stakes mattered most, Kinnick Stadium brought its A game.  I know this all sounds cheesy, and life’s not a Disney movie, but it’s a testament to the type of fans and people in this state and from this school.

There’s one more home game on Friday.  It’s senior day.  It’s against Nebraska.  I know it no longer means anything in the Big Ten race, but if I learned anything about Iowa fans Saturday, Kinnick will be packed and rocking again.

If you’re on the fence about driving back for the game, do it.  You only get so many opportunities to be a part of a great crowd, and you just might miss one like we saw Saturday.  This team played its heart out Saturday and deserves it.

I know I’ll be there screaming my head off for my last home game as an Iowa student, and I can’t wait to belt out a rendition of In Heaven There is no Beer as we watch the Hawks carry off the Heroes Game trophy for the second straight year.