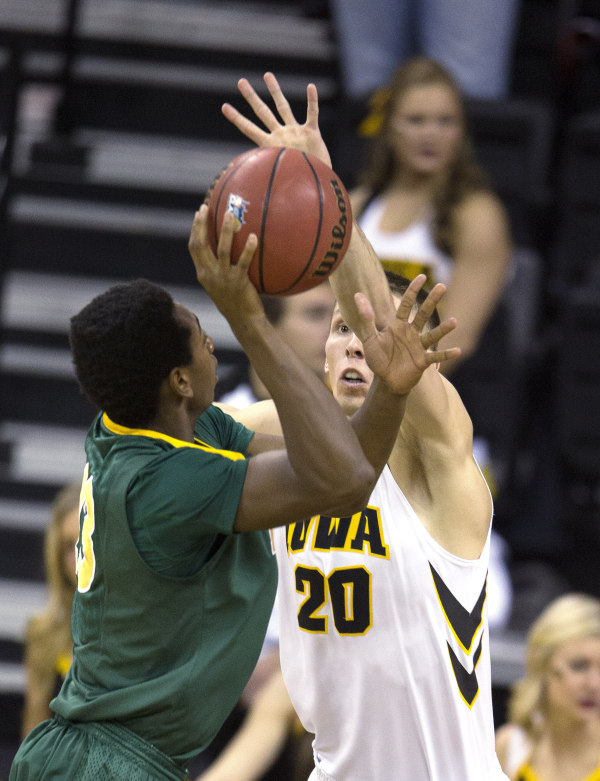 IOWA CITY- The Hawkeyes (2-0) used a quick start and an impressive defensive push to ignite a 87-56 victory over the North Dakota State Bison (0-2) in front of 12,333 at Carver-Hawkeye Arena. Iowa used an early 11-2 run to begin the game and never looked back.

The Hawkeye defense used a three quarter court press, which, coupled with their length and quickness, forced 9 first half turnovers.

Iowa had no intentions of letting up after taking their initial 4-2 lead. The post size down low for the Hawkeyes proved to be too much. Junior center Adam Woodbury filled the stat sheet early on and went on to finish the game with 10 points, 11 rebounds, an assist and a block. Gabriel Olaseni led the Hawkeyes with 14 points. He added 11 rebounds and 2 blocks. The duo each posted double-doubles. Aaron White finished with a team high 5 assists.

Coming out of the halftime break, Iowa opened up a 32-point lead after a quick 15-0 spurt. The Bison could not get much going, with their first second half field goal coming with just 13:50 remaining in the game. North Dakota State finished the game shooting an abysmal 26.9% (18-67) from the field.

North Dakota State, coming off of an 85-50 debacle in Texas against the Longhorns, had early woes, shooting just 9-33 (27.3%) from the field in the first half. The Bison used perimeter shooting to keep them in the game early on, but the Hawkeyes defense was too much.

The defense was all over the place, forcing a poor shooting night for the Bison. They used their press throughout most of the game and forced a promising 16 turnovers.

“I feel like we paid attention to the game plan defensively. Alexander got away from us late, but we did a pretty good job on him for the most part,” Coach McCaffery said of his defense.

Hawkeye’s forward Aaron White, who came off of a 19-point performance against Hampton, was held to just 4 points in the first half on only 2 field goal attempts. He finished with 10 points and 8 rebounds.

When asked about his teams play, Aaron White responded, “We’ve been doing really well communicating and playing good team defense. I thought they (North Dakota State) worked it a little more and tried to get better shots and I thought we stayed locked in for the whole possession.”

The games’ leading scorer was North Dakota State’s Lawrence Alexander. Alexander, a 6’3 guard, was the Bison’s only consistent scorer. He finished with 21 points on 7-17 shooting with 3 rebounds and an assist.

Five Hawkeyes were in double figures as Iowa finished with a 53.6% (30-56) field goal shooting. The team finished with 45 rebounds, 20 assists, and 18 turnovers.

Iowa shot at will throughout the game, nailing 9 threes on 20 attempts. They also finished with a stellar 18-20 mark from the free throw line.

Aside from the 18 giveaways, Iowa’s head coach Fran McCaffery was pleased with his team’s performance. “We’ve done a pretty good job these last two games of locking into the game plan. We moved the ball; we really wanted to run, we got our transition game going.”

The Hawkeyes will travel to New York City where they will take on #10 Texas at 6pm on Thursday as a part of the 2K Classic.