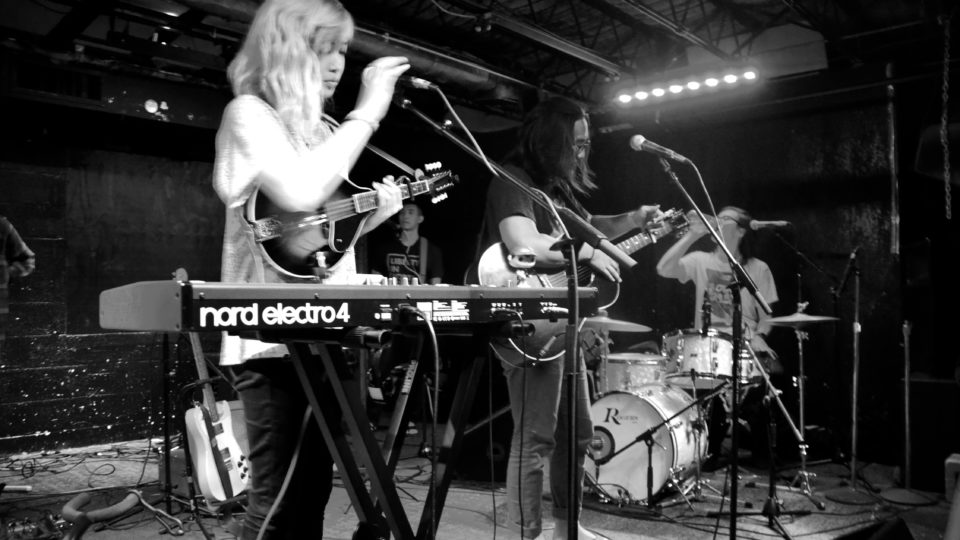 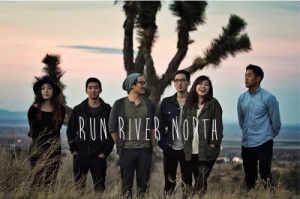 Korean-American indie folk band Run River North played at Gabe’s this past Saturday as one of their last stops before heading home to Southern California.

The set was filled with passion, energy, and messages of love and a desire to find home. They playing the entirety of their self-titled debut album, as well as a new song they’ve been working on throughout the tour, and an incredibly reserved cover of The Killers’ “Mr. Brightside.”

After the show I spoke with Daniel Chae, violinist and electric guitarist for the sextet. He said, “this was one of the best crowds on tour. Seriously, we’re just blown away by the love and support.”

Check out our video of their performance:

The Tuesday leading up to the show I spoke with Alex Hwang, lead vocalist and guitarist of Run River North.

Read the interview below:

KRUI: The band was originally, “Monsters Calling Home.” Why the name change? What’s the meaning behind the new name?

Alex: It’s simply because Of Monsters & Men. I feel like we were having too many conversations about them, and we wanted to stop talking about them so we just dropped the ‘Monsters’. The new name kind of came out from that. We were just letting go and seeing if we could come up with something better than that. What we came up with was Run River North. I have a friend whose daughter is named “River.” As we talked about it, it felt like it described our music and who we were a lot better than “monsters”. Our music and our live show is very much like a river where it can get really loud and bombastic and other times it gets really quiet and it’s more about the lyrics. It just has more emotion to it and we’ve grown into that name a lot more than “Monsters Calling Home.” And it’s still a song, but I feel like we’ve grown up from that.

Speaking of growing up, the first thing that really got the band going was the “Fight to Keep” video in your Honda. Where did that idea come from?

We were doing a cover for a friend of ours who requested a song and we didn’t have time to record it anywhere so we just decided to do it in my Honda CR-V. It sounded really [good]. There’s actually another video we have—a Black Keys cover—so after that we just decided to ante up and see if we could get into all of our cars and pretend like it’s a Honda video. Luckily for us Honda saw it and made a big deal about it and got us onto Jimmy Kimmel. It all started because of our cover song and it sounded great. And [we thought] why not make another video that doesn’t look live everything else on Youtube.

We’re all sons and daughters of immigrant, Korean parents. We’re lucky because we live in L.A. but a lot of times people see us and say, “Oh well they’re just Asian.” We see ourselves as American before anything else. For us it’s just, how can we reconcile our parent’s stories and what they gave up to give us an opportunity here in America, along with the fact that we have our own dreams, our own ambitions and can be different from what they expected of us. And how do you do that honorably and make sure that you’re not pissing on what they gave up while at the same time being true to yourself? In the band that’s something that we all wrestle with because some of us don’t come from completely musical backgrounds and given this opportunity, what do we do? Some of us worked in banking, others went to school for other things. I think for the message of the band, the songs that we sing are about what we consider ‘home’ and what does it mean to keep moving around so much. Regardless of what “dash American” you are. America is built on immigrants. It’s built on people trying to find ‘home’ with their careers or with their families or what not and I think that resonates well with the kind of message we had with our first album.

Have you received any negative response or backlash being a Korean-American group that plays your American folk/rock sound?

No I think most of the people are pleasantly surprised. We get a lot of people that say, “oh we did not expect that from you guys.” The initial response is obviously surprise but we’ve gotten nothing but open arms. People [are] buying our vinyl, our t-shirts, and coming to more shows because of the fact that we aren’t what you expect us to sound like. If anything the backlash only comes when [we] don’t get a response. There hasn’t been any hate mail or [people saying] “you guys shouldn’t be playing that music,” or “this doesn’t make any sense.”

Coming into a show do you have something you want the audience to take away from it?

Mainly, it’s very different from the album. It’s very different from the videos. I think already we’ve grown a lot from being on the road and seeing what our songs can do. It’s been this really organic show. I don’t know if theres anything to take away. We just love it when people are coming up to us and saying that was not what they expected. It’s a pretty fun live show. It’s really exciting for us to play. Also we have a new song on the set that we’re doing. So we’re already trying to figure out what our next album is going to be.

Have you started recording the new album?

We’re sampling. Once we’re back we’re going to sit down with different people, even ourselves, and see what it looks like and start recoding immediately.

Is there a sense if it will sound like the first album?

I think there’s going to be a lot of transition. The song “Beetle”—if you come to the show—what that is, is a great example of the direction we’re heading into. There’s definitely some folk elements to it but I feel like now being on tour and sharing the stage with all of these people. The songs on the album [we’re written] and the music came afterwords. “Beetle” is definitely a great representation is what our band is slowly becoming. It’s a lot more jammier. I think there’s a lot more room for other instruments to breath. It will have more of those elements than the folk-americana stuff. Also I think we’re going to be writing stories about other people because when we’ve been touring we’ve hearing so many other people talk about what the music is for them and hearing their stories, and hearing about their families, I think that will be a lot more of the lyrical material for the next album.

This interview has been edited and condensed for clarity.