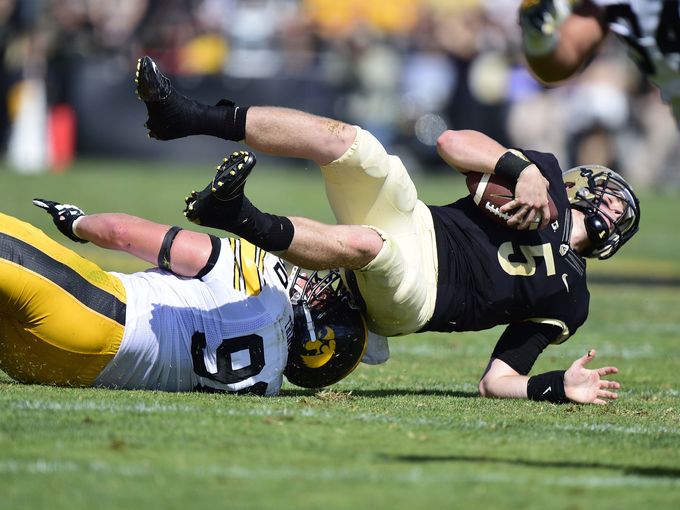 WEST LAFAYETTE,Indiana – Led by an outstanding defensive effort, the Iowa Hawkeyes (4-1) defeated the Purdue Boilermakers (2-3) 24-10 on Saturday afternoon to spoil Homecoming and open up Big Ten conference play with an important road victory.

The Iowa defense kept the Hawkeyes in the game, while the offense struggled all day to get anything going. Sophomore quarterback C.J. Beathard threw a first quarter interception to Purdue’s Frankie Williams that was returned for a Boilermaker touchdown.

This was Beathard’s first start under center for the Hawkeyes, and it did not go his way early. “It was a tough start for him [Beathard] obviously,”Iowa head coach Kirk Ferentz said.

At the end of the first quarter Iowa trailed 7-0, and the offense was flat and unable to pick up a first down.

“We just had to stay composed. Drops happen, bad throws happen, and missed blocks happen. We just have to have a short memory,” Beathard said, who finished the game 17-37 for 245 yards and one touchdown pass.

As the game went on, Iowa’s offense started to click, and Weisman scored on a two-yard touchdown. That Iowa drive went nine plays, for 53 yards and took 3:30 off the clock, bringing some spark to the Iowa sideline.

Purdue and Iowa both tacked field goals on to their scores, and the Boilermakers and Hawkeyes went into the halftime break tied at 10 a piece.

The Hawkeye defense continued to get pressure on Purdue QB Danny Etling making it tough for the Boilermakers to get anything going.

“They didn’t show us anything we didn’t know already. We just need to change the protection,” Etling said.

The Iowa defense also tallied four sacks on the afternoon.

On a play that was originally ruled out of bounds, Beathard connected with Iowa wide-out Kevonte Martin-Manley on a 23-yard, perfectly thrown back shoulder pass for a touchdown that put Iowa up 17-10 with 45 seconds left in the third quarter.

“At first to be honest I didn’t know I scored, but after I saw the replay I thought it might be a touchdown” Martin-Manley said.

On an 18-yard catch earlier in that drive, Martin-Manley moved into fifth all-time in career receptions at Iowa. Martin Manley was Iowa’s leading receiver on the day with five receptions, 74 yards and a touchdown.

Senior running back Mark Weisman went over 2,000 yards for his career on a 12-yard rush in the third quarter. “ The offensive line, fullbacks, and tight ends, it’s their yards, not mine”, Weisman said. “They are the ones blocking.”

Weisman scored again in the fourth quarter on a five-yard touchdown that put the Hawkeyes up 24-10 and ultimately sealed the win.

Iowa outscored Purdue 14-0 in the second half, with the defense only allowing three points total. The Iowa defense also eliminated any fourth quarter drama thanks to Iowa safety John Lowdermilk, who intercepted two Etling passes.

With the victory, Iowa has now won four-straight road games, including six of it’s last seven. Today’s win also marks the third time this season that Iowa has trailed by 10 points and has come back to win.

It’s clear so far this season that Iowa is second half team, and left tackle Brandon Scherff says it all starts at halftime.

“We evaluate how the first half went, change things up and just try and do our job.” On how Iowa continues to fight in the second half and win close games, Martin-Manley says, “This is how we’re built, we just have to do it and get it job done.”