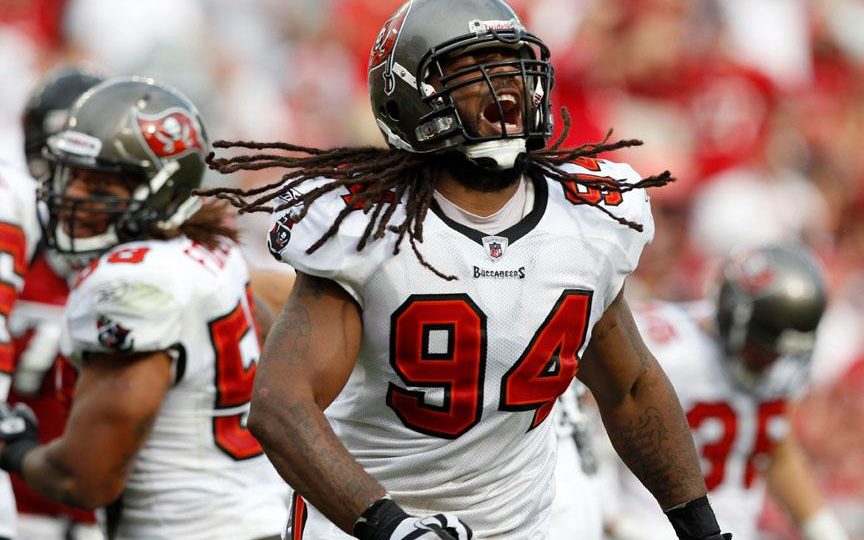 The Tampe Bay Buccaneers have announced that they will be without defensive end and former Iowa Hawkeye, Adrian Clayborn. Clayborn, who missed 13 games in 2012 after tearing his ACL, was placed on injured-reserve after a biceps injury.

Clayborn, a No. 20 overall pick in the 2011 draft, dazzled Hawkeye fans with his beastly performances. Who could forget Clayborn’s punt block, scoop and score in 2009 against Penn State?

Earlier this year, the Buccaneers declined Clayborn’s fifth-year option, meaning that he will be a free agent once the 2014 season is complete.

However, his injury doesn’t mean we won’t be seeing him in the league once he heals. Since Clayborn’s time in the NFL, he has recorded 109 total tackles and 13 sacks for the Buccaneer defense.

When healthy, Clayborn has proven the fact that he can play. The question become, why take the risk on a defensive end who has a track record of significant injuries?

Listed as 6’3’’ 280 pounds, Clayborn can provide a pass rush that is very critical in this day and age of the NFL. As more teams adopt a read option and become reliant on a pass heavy offense, players like Clayborn have become a critical counterattack.

For the Buccaneers, it’s time to move forward. Coming into the 2014 NFL season, analysts spoke greatly about head coach Lovie Smith’s defense on paper. In the NFL, paper doesn’t seem to hold up too well against guys like Drew Brees, Jay Cutler and Aaron Rodger, all individuals that will face the Bucs this season.

To combat the loss of two defensive ends, the Bucs claimed Jacquies Smith, who recorded eight tackles in the 2014 Buffalo Bills presesason.

The Buccaneers have a lot of ground to make up in the coming weeks. They will face the St. Louis Rams, Atlanta Falcons, Pittsburgh Steelers, New Orleans Saints, and the Baltimore Ravens before heading into their off-week in week seven.

Lovie Smith and the Tampa Bay Buccaneers have a lot of work ahead of them.