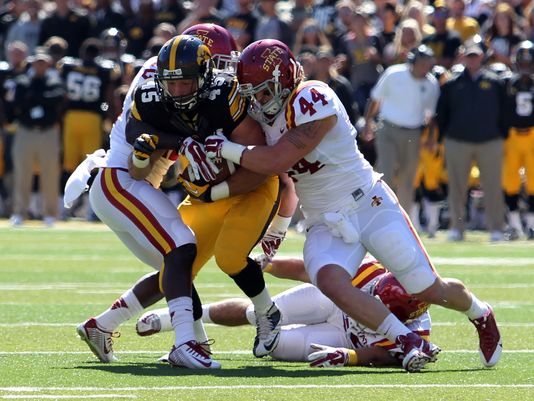 For Iowa, scoring started early as senior running back Mark Weisman lowered his helmet on Iowa’s second drive to put the Hawkeyes up early. Mick Ellis provided the point after try making the score 7-0.

The Cyclones answered in the second quarter on a 47-yard field goal from Cole Netten. The Hawkeyes were then able to capitalize before halftime as Jake Rudock ran five yards into the end zone, making the score 14-3 at halftime

The Cyclones were too much for the Hawkeyes in the second half.

Iowa State scored once again, this time in the fourth quarter, as Richardson found DeVondrick Nealy, on a 27-yard touchdown pass. This gave the Cyclones a 17-14 lead early in the fourth.

Iowa was able to tie up the game as Marshall Koehn connected on a 44-yard field goal.

With a 17-17 tie, the Cyclone offense controlled the ball for the remainder of the fourth quarter. Netten booted a 42-yard field goal with under ten seconds left in the fourth, ending any hope of an Iowa Hawkeye comeback.

The Hawkeyes tried to reestablish their running game against Iowa State. The return of Brandon Scherff, who many had doubted would play, added hope to the Iowa offense.

Senior Mark Weisman led the Hawkeyes on the ground with 16 carries for 49 yards. Iowa finished with 44 carries and 129 yards on the ground as a team. All of Iowa’s touchdowns came off of rushing attempts.

Jake Rudock provided the aerial attack as he went completed 16 of 24 attempts for 146 yards and one interception. He was able to find seven different receivers on the day, with Damon Bullock and Tevaun Smith catching four passes to lead the Hawkeyes.

Sam Richardson put together a nice game for the Cyclones. Richardson completed 25 of 27 attempts for 255 yards. He also tossed a pair of touchdowns, one that gave the Cyclones the lead before Iowa tying field goal. Richardson connected with eight wide receivers on the day.

The ground game was something that the Cyclones struggled with throughout the game. With 26 attempts, Iowa State rushed for only 82 yards.

A big loss for Iowa came in the fourth quarter when wide receiver, Jarvis West, took a hit from Jordan Lomax. Lomax was flagged for targeting and ejected from the game. By rule, Lomax will miss the first half next week against Pittsburgh.

The Iowa Hawkeyes will look to bounce back as they travel next week to take on the Pittsburgh Panthers who are 3-0 on the season. The kickoff is slated for 11 a.m. and can be heard on 89.7 KRUI or krui.fm.