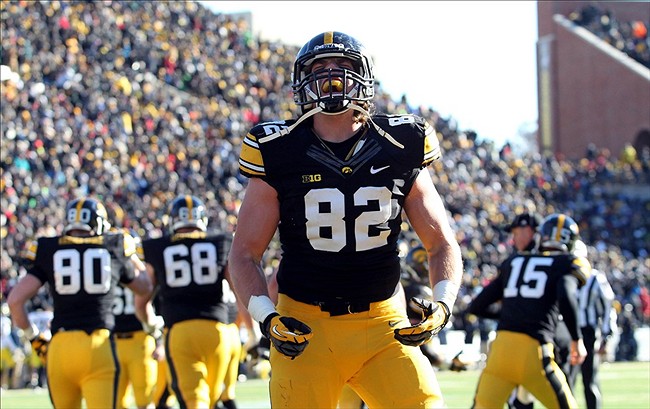 IOWA CITY, Iowa – During his tenure as the head coach of the Iowa Hawkeyes, Kirk Ferentz and his coaching staff have produced a plethora of NFL caliber tight ends. The list seems to go on forever. Guys like Dallas Clark, Scott Chandler, Tony Moeaki, Austin Wheatley, Erik Jensen, Tony Jackson, Brandon Myers and most recently C.J. Fiedorowicz have all found their way into the NFL.

In 2013, C.J. Fiedorowicz entered his senior year as the number one tight end for the Hawkeyes. His size and strength gave Iowa quarterback Jake Rudock a solid target in the passing game. Rudock and Fiedorowicz connected 30 times, for 299 yards, and a team high six touchdown receptions. Fiedorowicz was selected by the Houston Texans in the third round of the 2014 NFL Draft.

During Iowa’s 2014 media day there were questions about the loss of a player such as Fiedorowicz and its impact. However, Ferentz didn’t hesitate when talking about his current group of tight ends.

“I think we lose an outstanding player in C.J., but I think we have four guys that can absorb that a little bit,” Ferentz said.

With a spot at tight end to fill, senior tight end Ray Hamilton is listed as the number one tight end on the depth chart coming into early August.

“Ray Hamilton is a guy, in my opinion, that is probably better than we think he maybe is,” Ferentz said. “He has done some really good things and I think we’ve seen him grow since last spring.”

Hamilton, a native of Strongsville, Ohio saw action in all 13 games of 2013 for the Hawkeyes. Three of those appearances for the Hawkeyes were as a starter. Hamilton collected eight receptions for 95 yards. With the focus how to filling the spot at tight end, Hamilton reflected on transitioning to the starting spot left by a playmaker in Fiedorowicz.

“There will be more opportunities for myself and for other guys. Whoever’s number is called at that time you got to go out and make a big play,” Hamilton said.

Ferentz stated the desire to use multiple tight ends, possibly three in a formation this season.

“It might be more committee work than one individual, that’s something we like to do and have available if possible,” Ferentz said.

The committee would also include junior Jake Duzey, junior Henry Krieger Coble, and sophomore George Kittle. Talent wise, many look towards Duzey as a promising target at the tight end position. Duzey was able to display his athleticism last year against Ohio State where he hauled in six receptions for 138 yards and notched his first career touchdown. Hamilton echoed the amount of talent within the group of Iowa tight ends.

“We have a lot of talent in our group and guys who can do a lot of different things. When the competition is higher you’re getting the best out of everybody. If everyone keeps pushing forward and keeps pushing each other we’ll have a hell of group,” Hamilton said.

With Iowa’s 2014 media day over and practice getting started, the work has been set forth for another group of promising tight ends at Iowa.

“It’s just put your head down, get to work, and good things will come,” Hamilton concluded.

Hamilton and the Iowa Hawkeyes will have until August 30 to answer any questions in practice as the UNI Panthers will make the trip down I-380 to Iowa City in what looks to be another hard fought instate clash.