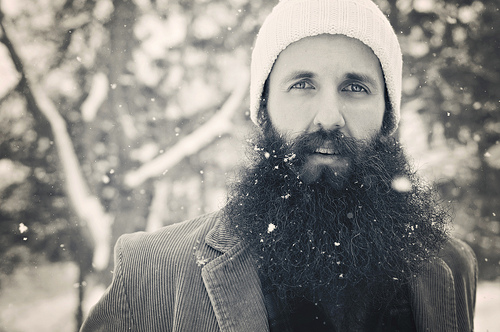 The William Fitzsimmons show at the Englert  was unlike any show I’d ever seen.  It wasn’t the best show of my life, but it certainly was one of the most interesting. 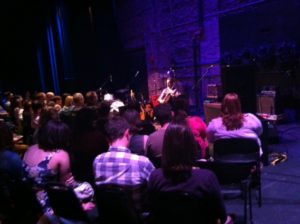 All seating for this event was on stage, which created an intimate and personal atmosphere for both the audience and the artists.

The warm up act was singer and cellist Ben Sollee.  He had a rich and rustic voice that wove itself to the cello in a fantastic way–his voice and cello enhanced each other in both volume and intensity.  Sollee is definitely worth checking out.

William Fitzsimmons and his scraggly beard took the stage next.  He began strumming and singing right away and it became apparent that despite his scruffy appearance he has a fluidly peaceful voice. 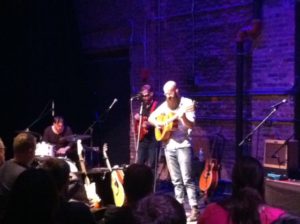 Fitzsimmons played two slow, lullaby-like songs before he addressed the crowd.  “It’s going to kind of be a party night if you can’t already tell,” he said sarcastically.  “So don’t be afraid to get up and dance.”

He continued to play the same sort of sounding music.  It was all hardcore folk, which is to say, good lyrics and smooth melodies.  Each song was as soothing as a warm cup of tea.  But the best part of the show, by far, was Fitzsimmon’s hilarious commentary.

“That song was about boners,” he announced about a song about his depression (which seemed to be what every song is about), then bashfully looked at his feet and said, “Wait, I have a confession…that song wasn’t really about boners.”

Two things made this concert that significantly better.

One, the on stage seating made it a “living-room show of sorts” as Fitzsimmons pointed out, and I think this is the environment in which he flourishes.  He connected with the audience well, and his connection to the audience reinforced his comfort and confidence on stage. 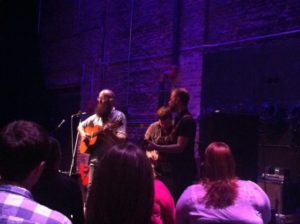 Two, I firmly believe I would not have enjoyed the concert if he had not talked.  His music was good, but it doesn’t seem to be meant for the stage–it seems for suitable for the background music of a movie or tv show (two of Fitzsimmons songs have actually been played in Grey’s Anatomy)  or otherwise playing when you’re moody and it’s raining.  His personality was sparkling and humor comparable to a stand-up comedian.

Fitzsimmons played his first ever encore at the conclusion of the show.  It lasted 40 minutes making the concert overall a little over 3 hours. He claimed the show’s painfulness was somewhere between a beloved family pet’s death and world annihilation.

However I liked the show, just in a different sort of way.  Fitzsimmons is a  talented musician and perhaps an even more talented comic.  I wouldn’t mind seeing him in stand-up.

Here’s one of his songs for a rainy day.