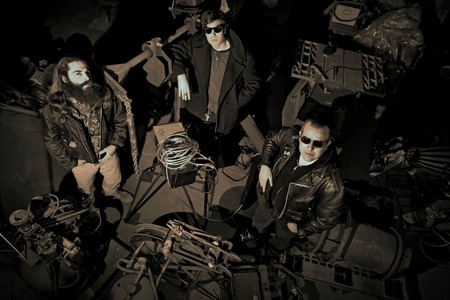 Mating Call was the first to take the stage.  The crowd was scarce as there didn’t seem to be more than ten or fifteen people huddled in front of the small stage.  But that didn’t stop the band from giving it their all.

Mating Call was relentless, not offering a single second of silence throughout their entire set.  Behind a table filled with sound equipment, two of the members produced electronic drum beats while turning various nobs and tuners.  On the left of the stage, a guitar player builds and layers endless chords upon one another.  The main focus, however, was on the vocalist who danced around and in the audience screaming into the mic.

By the time the second act was ready to perform, the crowd was steadily growing larger.  Curt Oren brought a much different style of music to the stage.  While much more simplistic than Mating Call, Oren kept the energy up with his baritone and alto saxophone solos.  “Sorry”, Oren said after the first song.  “My lower register is broken.  This would sound a lot more bad ass if my lower register wasn’t broken.”  But based on the reaction of the audience, nobody seemed to mind.  Oren performed several jazz inspired pieces that immediately pulled the crowd towards his unique style.

The third act of the night, Taser Island, brought a different aspect to the show.  The duo sat in chairs in front of the stage while a projector showed three different video clips of various locations.  The group played along to the footage with acoustic guitars and electronic beats, singing along with an eerie harmony.  Off to the side, a third member who had offered to help for the night played long, quiet notes out of an electric guitar, creating a beautiful sense of ambiance to underscore the vocals.

A little past midnight, Wolf Eyes took to the stage.  The crowd had grown as the hours passed, packing the floor just in front of the stage.  By now the crowd was definitely pumped and ready, and Wolf Eyes did not disappoint.  The group started right away.  The two guitar players both building off each other’s sounds, letting them bounce off one another holding up the hardcore punk style vocals from singer Nate Young.

My favorite song of the night was the encore.  Spanning a grand ten minutes, the band layered its sound over time, using pedals to loop various vocals and guitar riffs until the cacophony of sound had enveloped the entire venue creating what was probably the loudest show Mission Creek has seen.  Even while typing this hours after the last note was played, my ears are still ringing.