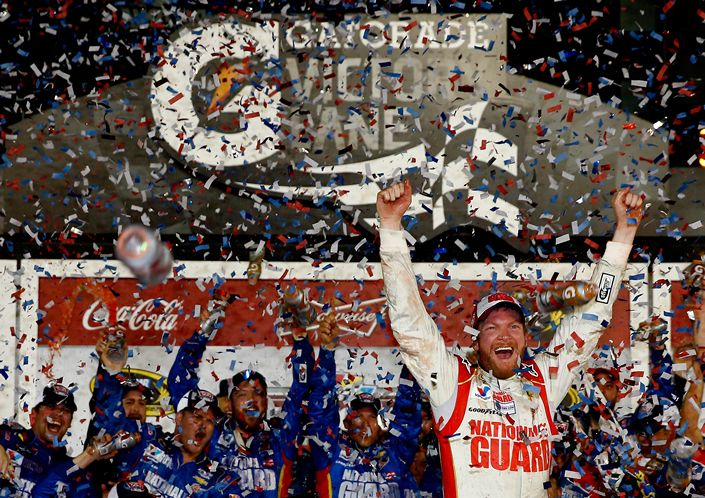 The career that Dale Earnhardt Jr. has been able to put together prior to the 2014 NASCAR Sprint Cup season has been one notably overshadowed by one man. That man is his own father, the late Dale Earnhardt.

When I begin to think about Dale Jr. and what he has been able to accomplish, it is almost impossible to not compare him to his dad. Today we live in a sports world where we always look to compare athletes. For instance, there is the mind numbing argument of LeBron James vs. Michael Jordan argument, or the comparisons of Peyton Manning to NFL’s legendary quarterbacks.

Dale Jr. entered into the highest form of racing in 1999 in the former NASCAR Winston Cup Series, driving the number 8 for Dale Earnhardt Inc. After a handful of races in 1999, Dale Jr. became a full time NASCAR Winston Cup Driver in 2000. It didn’t take him long to find victory lane as Earnhardt Jr. scored his first win at Texas Motor Speedway in just his 12th start, breaking his dad’s record for fewest starts by a driver to win an event.

Unfortunately, that memorable year in 2000 was quickly overshadowed by the tragic accident on the last lap of the 2001 Daytona 500 that took the life of Dale Earnhardt.

Even before the death of Dale Sr. many people speculated about the possibility of Dale Jr. becoming the next driver to challenge the seven championships of Richard Petty and Dale Earnhardt. Since that fateful day in 2001, it’s safe to say the career of Dale Jr. is not what most had expected. However, while what Dale Jr. has done on the track can be measured, what he has done for NASCAR off the track cannot.

What stands out the most to me is the 11 straight Most Popular Driver awards in NASCAR. This feat speaks volumes about the following that Dale Earnhardt Jr. has acquired throughout his career. With the amount of new drivers that enter NASCAR yearly, the roar of the crowd for Dale Jr. is often heard over the noise of 43 of the loudest machines in sports.

Dale Jr. has also been able to find success with consistent finishes in the point standings at the end of the NASCAR season. Over the past 13 years, he has an average at 11.5 in the standings, with his best finish being in 2003 when he placed third.

Although the comparisons between athletes will never end (and in this case father and son) it is safe to say that Dale Jr. has been able to find a fresh start in the 2014 NASCAR Sprint Cup season. His victory in the newest edition of the Daytona 500 has without a doubt lit a fire within his Hendrick Motorsports team.