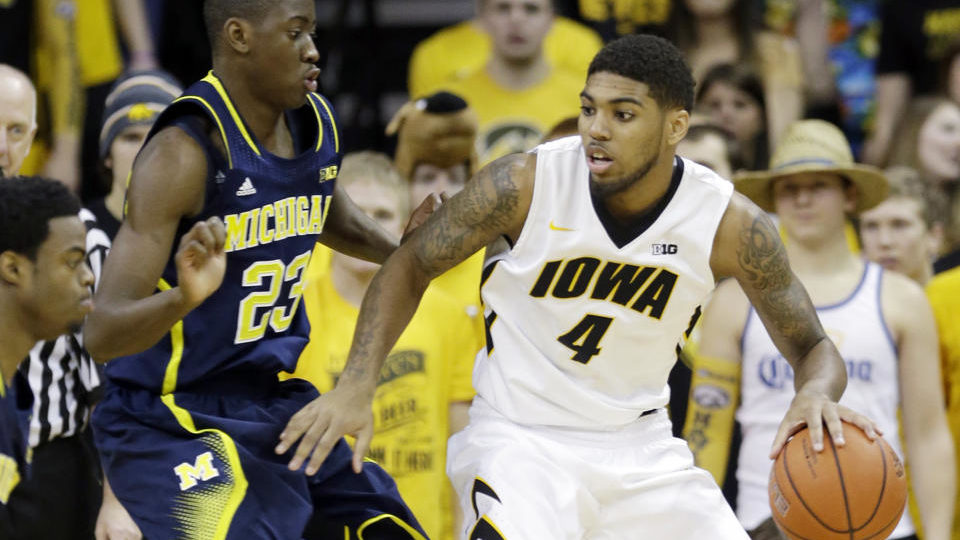 IOWA CITY, Iowa – It seemed as though every shot that the Hawkeyes took on Saturday afternoon was going to fall as #17 Iowa shot 47.5% as a team from the field in route to a blow-out 85-67 win over the #10 Michigan Wolverines. Roy Devyn Marble led all scorers with a game high 26 points including 6-10 from 3-point range as the Hawkeyes are now 6-0 following a loss this season, the latest of which came Tuesday night against the Ohio State Buckeyes.

The Hawkeyes (18-6, 7-4) came out firing early in the game as Marble knocked down 3 of his 6 3-pointers in the first 5 minutes as Iowa jumped out to an 11-4 lead and never looked back. The offensive barrage by the Hawkeyes sent the sold-out Carver-Hawkeye Arena crowd into a frenzy that would last all afternoon long.

The Wolverines (17-6, 9-2) were able to fight back and a Zak Irvin 3-pointer capped off an 8-0 Michigan run that cut the Hawkeye lead to 33-25 with just under 4 minutes to go in the first half. Irvin scored a career high 19 points including 4-6 from long range. The Hawkeyes however were able to weather the storm and went on a 10-4 run of their own to end the half that was capped off by yet another Devyn Marble 3-pointer to beat the first half buzzer and gave Iowa a 43-29 lead at the break.

“That was a player of the year candidate performance today,” said Michigan coach Jon Beilein of Roy Devyn Marble. “He’s a senior and they’re always going to make it happen and it’s a great story.”

The Hawkeyes picked up where they left off to start the 2nd half and the Wolverines never got closer than 14 as the Hawkeyes ran away with it.

Iowa was also able to put the clamps on defensively and held Wolverines leading scorer Nik Stauskas to 10 points on just 1-3 from 3-point range. Caris LeVert added a team high 22 for Michigan, who have now lost two of their last three after starting out Big Ten play 8-0.

“We were locked in defensively,” said Iowa coach Fran McCaffery on the defense that the Hawkeyes played against the Wolverines and especially on Stauskas. “We felt like to beat Michigan we needed to play the kind of defense that we played because they have so many different weapons, and it wasn’t only about getting stops, but getting stops and being able to run in transition and create good offensive opportunities.”

The Hawkeyes now get a much needed week off before continuing Big Ten play next Saturday afternoon as they go on the road to play Penn State in Happy Valley.

The Wolverines will finish off a stretch of 5 games in 13 days on the road at Ohio State on Tuesday night before returning home where they close with 5 of their final 7 conference games at home.