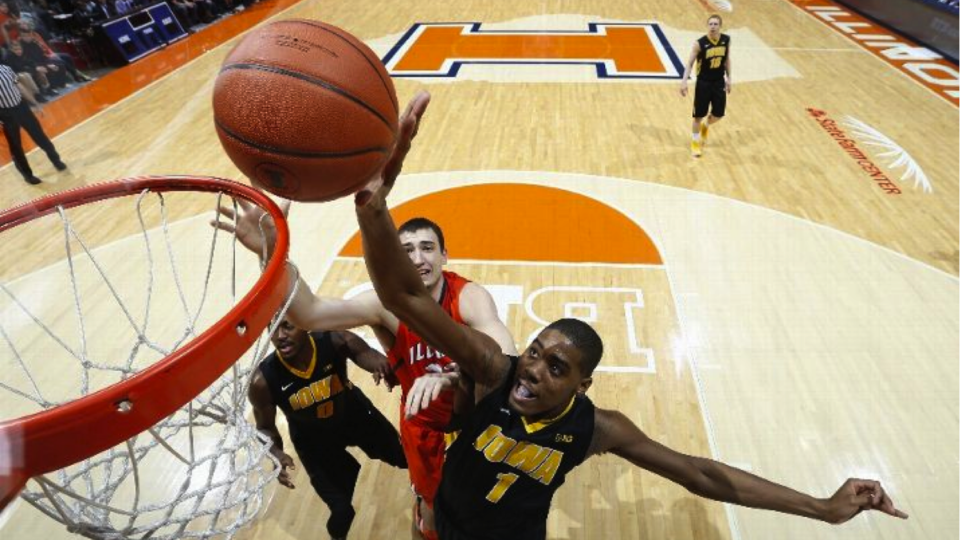 Champaign, IL – For the first 12 minutes of Saturday night’s game between the #15 ranked Iowa Hawkeye’s and Illinois Fighting Illini, it seemed as though Iowa had forgotten all about it’s heart breaking 71-69 overtime loss at the hands of Michigan State on Tuesday night. The Hawkeyes had built a 34-13 early lead due in part to grabbing 8 offensive rebounds, which led to 14 second-chance points. Gabe Olaseni scored 7 of his career-high 15 points during this stretch as it looked as though the game was going to turn into a rout.

“Gabe was all over the place tonight, and was obviously able to grab the huge offensive rebound late,” said Iowa head coach Fran McCaffery. “ The fact that he was able to give us some big minutes down the stretch is huge for our team going forward.”

The Fighting Illini however, were able to recover and used a 23-6 run to end the first half and cut the Hawkeye lead to 40-36 going into the break. The Illini charge was lead by Joseph Bertrand who scored 12 of his game-high 20 points in the first half to keep his team in it. The Hawkeyes fell into a scoring drought eerily similar to the one that doomed them on Tuesday against the Spartans as they went without a field goal for the final 7:37 of the first half.

Illinois (13-9, 2-7 Big Ten) continued their hot shooting in the second-half and a 3-pointer by Tracy Abrams gave the Illini the lead at 62-61 with just over ten minutes left in the ball game, their first lead since starting the game up 2-0. The Illini would extend their lead to 66-61 on a layup by Drake transfer Rayvonte Rice to cap off a 7-0 run, and it looked like the Hawkeyes were on their way to dropping another close one. Iowa however went on a 5-0 run of their own to tie the game at 66, and took the lead for good with a bucket by Mike Gesell that made it 72-70 with just under 4 minutes to play.

The Hawkeyes (17-5, 6-3) locked down defensively and were finally able to make some clutch free throws down the stretch to escape the State Farm Center with a hard fought 81-74 victory. The win snapped Iowa’s 11-game losing streak in Champaign and gives them their first road victory over the Fighting Illini since 1999.

“You never want to lose two in a row and I think that it says a lot about our team’s character that we were able to hold on tonight,” McCaffery said. “You look at how everyone is beating everyone in this conference right now and it would have been easy for us to just fold up, but if you want to compete for a conference title then you’ve got to be able to fight back.”

The loss for the Fighting Illini was their 7th in a row after starting off Big Ten play at 2-0 and further dampens what was their already fading NCAA Tournament hopes. Illinois continues its home stretch and will host the struggling Wisconsin Badgers on Tuesday night.

“This one stings because of how hard our guys played and I couldn’t be more proud of the toughness and togetherness we showed in the loss,” Illinois head coach John Groce said. “We’re going to have to build on this and figure out how to give that same effort that we gave for the final 30 minutes going forward.”

The Hawkeyes now turn their focus to the 24th ranked Ohio State Buckeyes who will come to Iowa City on Tuesday night looking to avenge an 84-74 loss suffered at the hands of the Hawkeyes earlier this season. The Hawkeyes can ill-afford many more losses if they hope to stay in the Big Ten race with one loss Michigan State and the undefeated Michigan Wolverines.