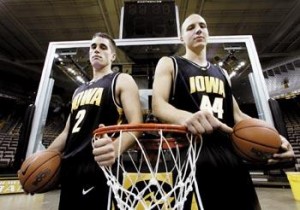 Having lived in Iowa my entire life, I have never had the opportunity to support a hometown professional sports team. However, growing up in Iowa you know that two teams rule the state: the Iowa Hawkeyes and the Iowa State Cyclones (my apologies to the UNI Panthers).

Up until I was about 10 years old, I really didn’t care too much about team loyalty. Sure, I knew I liked Troy Aikman, Michael Irvin, and Emmitt Smith, but the Dallas Cowboys were 900 miles south of my North Iowa homestead. I had no real connection with them.

A recent article by KRUI contributor, Jeremy Meyer, made me start to wonder if I had missed out on having a real connection with a team and players, such as the one the people of Boston have with Paul Pierce and Kevin Garnett.

My answer: Absolutely not.

You see, if you are from Iowa, care about, love, or even associate with sports, you make sure you pick a side. Whether it’s the black and gold of the tiger hawk, or the cardinal and yellow of Cyclone nation, the choice you make lasts with you forever. If you don’t believe me, ask almost any Iowan and they will probably tell you that 95% of holiday gatherings include a debate about the Hawkeyes and the Cyclones.

I read Jeremy’s article and immediately knew what he was talking about. Paul Pierce and Kevin Garnett were the staples to the Boston Celtics incredible run in 2008 when they won the NBA Finals. Those two individuals had left an incredible mark on the city of Boston, one that will never be forgotten.

This got me to thinking back to the question, what players and teams had I ever really connected with as an Iowa sports fan?

I immediately thought of the 2005-2006 Iowa Hawkeyes men’s basketball team. That season the Hawkeyes were coached at that time by Steve Alford, current coach of the UCLA Bruins. The Hawkeyes were on a mission that year going 11-5 in the Big Ten, ultimately winning the Big Ten tournament. With the Big Ten tournament win, Iowa was the #3 seed in the 2006 NCAA Tournament. By the time Iowa had made the tournament, Hawkeye players like Greg Brunner, Jeff Horner, and Adam Haluska had entranced the entire state of Iowa, myself included, with their spectacular play.

I remember that 2006 NCAA tournament like it was yesterday. I was a freshman in high school and we were given the opportunity to watch the Hawkeyes play their tournament game that day in school. Iowa had what many thought an easy victory in their sight as they faced 14th seeded Northwestern State. The game unfolded into a tightly contested battle and ended with Northwestern State hitting a fade away three with around .5 of a second left in the game. This led to a desperation heave by Haluska that hit the front iron, ending the Hawkeyes’s incredible season.

And just like that, it was over. I had seen the last of Jeff Horner and Greg Brunner in an Iowa uniform. These two individuals, who had played four seasons for the beloved Hawkeyes, the guys that I credit with capturing my devout interest in Hawkeye basketball were now just cherished alumni.

That’s what Iowans deal with when it comes to sports. We see players grow up in front of our eyes in the college ranks with hopes to one day see them flourish within professional sports.

Sure, you may think that it’s simply a college team, but for many in Iowa, it’s all that really matters in terms of sports. I cannot recall the number of conversations I’ve had with people much older than I that talk about great Hawkeye and Cyclone teams of the past. Sure, many of these same people have followed professional sports teams such as the Chicago Cubs, Minnesota Twins, Chicago Bears, and Minnesota Vikings, but the stories about the Cyclones and Hawkeyes always spark a note of passion not often heard in other stories.

It’s hard to not get caught up in the desire to have a major sports franchise in Iowa, such as the NFL or MLB. However, as I reflect on all the memories that I’ve made by simply watching a couple of teams, whose cities are surrounded by an abundance of cornfields, I can’t help but be thankful for the passion and history that they have brought into the great state of Iowa.