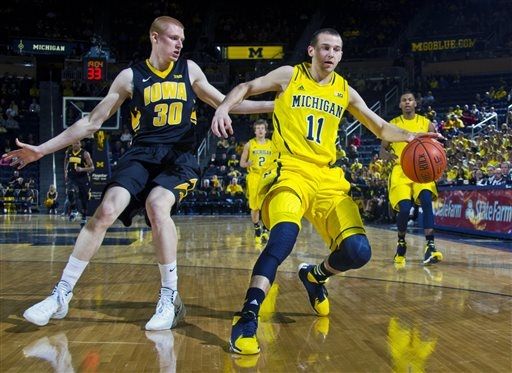 The Iowa Hawkeyes fell to the Michigan Wolverines on Wednesday night in a big time Big Ten match up by a score of 75-67, that score is 20 points under the season scoring average for Iowa.

Iowa actually got off to a good start and held the lead for most of the first half, but towards the middle of the first half Michigan went on a 9-0 run to gather the lead.  Iowa would answer, but it wasn’t exactly the haymaker that Michigan threw.  Melsahn Basabe was red hot for Iowa in the early going as he had 10 early points as he couldn’t be stopped in the lane.  Basabe would end the first half with 15 points.

Nik Stauskas also had 15 points for Michigan in the first half.

Both teams shot the ball very well in the first half, but the difference was Michigan had made 4 three pointers compared to just one for Iowa.  I thought going in that Iowa would have to keep up with Michigan in that department if they wanted to bring the win back to Iowa City.

The Hawkeyes would only shoot 2-10 from behind the arc, while Michigan banged home 8 of those bad boys.  For me, that, and Iowa allowing 10 offensive rebounds to Michigan is what really hurt them.  That is very uncharacteristic of this Iowa team.  They did win the rebounding battle, but it was just 33-32.  If you look at most games Iowa wins, they usually win the battle on the boards by 8 or more.

I am not at all surprised by this loss for the Hawkeyes.  Everyone knows that the Big Ten is an absolute grind and anyone can beat anyone night in and night out.  This would’ve been a big road win for the Hawkeyes, but they just couldn’t pull it out.  They will have to rebound quickly as they will go visit the red hot Northwestern Wildcats.

Basabe and Aaron White each had 17 points on the night, while Roy Devyn Marble chipped in 13 for the Hawkeyes.  After 17 points against Minnesota, Josh Oglesby was absent.  He managed just 2 points.

Michigans Nik Staukas had 26 points, 5 rebounds, and 5 assists.  As a basketball fan how can you not be impressed with the stuff Stauskas has done already this year.

Iowa’s next game is Saturday against Northwestern.  Tip off for that game is scheduled for 11 a.m.