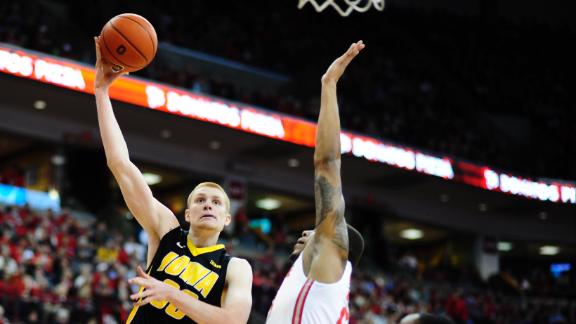 The Iowa Hawkeyes finally got over the hump.  You know that big win that had been eluding Iowa for a better part of the first half of the season?  Well, Iowa finally found it, on the road, against the #3 Ohio State Buckeyes.  Also, it couldn’t have come at a better time.

The Hawkeyes held the lead for a good part of the first half.  They were neck and neck with the Buckeyes and took a 2 point lead into the locker room.

I don’t know about you guys, but it kind of had the feeling of the first three games Iowa had lost and as the second half started, it appeared that another loss was certain.  Ohio State started to hit some outside shots and Iowa had nearly gone 5 minutes without a field goal.

It appeared it was happening again, ugh!  Not so fast though.

Mike Gesell, Jarrod Uthoff, and Aaron White hit back-to-back-to-back three pointers to tie the game at 55.  Just like that, it was a brand new ball game.  The best part about all of it was there was no hesitation in these shots, they got it and shot it and that’s the kind of confidence you have to play with when you’re playing a big time opponent.

Iowa got a couple of breaks as the game wound down, but did their part to take home the victory.  The biggest shot came from Aaron White with Iowa up 4 points.  White nearly lost the ball and probably fouled Lenzelle Smith Jr. trying to get it back, but he eventually did.  He took it down towards the right wing and kind of lofted up a shot.  He somehow banked it in to give Iowa a 6 point lead.

The Hawkeyes hit some key free throws down the stretch and ensure their victory over the Buckeyes.

This is only the third time in the past four seasons that a team has scored 80+ points on the Ohio State Buckeyes.

Devyn Marble’s play earned him Big Ten Conference player of the week.  This is the first time the award has been given to a Hawkeye since it was given to Matt Gatens on Feb 27th, 2012.

The big win also vaulted Iowa into the top 15.