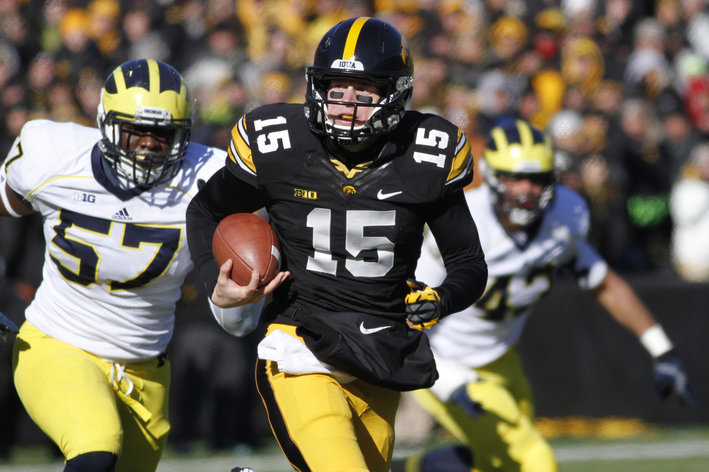 Iowa City, Iowa- It truly was a tale of two halves as the Iowa Hawkeyes turned a 21-7 halftime deficit into a 24-21 victory on Senior Day at Kinnick Stadium.

The first half was as close to a total disaster as the Hawkeyes have seen all season. The offense started the day with a busted play-action that turned into a 7-yard interception returned for a touchdown by Michigan. Mike Meyer missed a 36-yard field goal and had a botched attempt just before the half.  Michigan had a 21-7 halftime lead and the Iowa offense looked like it would not be able to recover.

The whole dynamic of the game changed with the start of the second half. With just a 1:25 gone in the second half, Jake Rudock connected with Teavaun Smith over the middle, who took it 55 yards for a score that brought the Hawkeyes to within 7. While that would be the only score of the third quarter, the defense stood tall and only allowed 10 total yards.

Once the fourth quarter started, the offense had completely worn down the Michigan defense and was able to move the ball with ease. Iowa sustained two scoring drives that lasted for more than half of the fourth quarter that gave the Hawkeyes a 24-21 lead.

On a day where the offense struggled to sustain momentum and consistency, the defense held Michigan to just 158 total yards and just 45 in the second half.  It was a far cry from the 513 total yards Michigan put up on the Hawkeyes in Ann Arbor last season. In their final home game, seniors Anthony Hitchens and James Morris each had 8 tackles including 4.5 for a loss.

After having a breakout performance against Purdue, Jordan Canzeri split carries with Mark Weisman and ended the day with 53 yards. Weisman led the team with 92 yards and had a 7-yard, game-tying score, in the fourth quarter. Heading into the regular season finale against Nebraska and the potential bowl game, Iowa will most likely continue to split time between whichever backs are getting it done.

After the 4-8 season the team endured last season, the composure of the team and its ability to comeback in close games was evident to coach Kirk Ferentz.

“We made it hard on ourselves in the first half, the short field made it tough, we did some good things but it was not enough,” Ferentz said. “The whole team grew in the second half. We knew that we could play better in the second half.”

The bowl destination for the Hawkeyes is not yet know but a win on Friday over Nebraska could put the team in a prime position for a top-tier bowl. A victory over Nebraska would be the first for Iowa since the Huskers moved to the Big Ten.