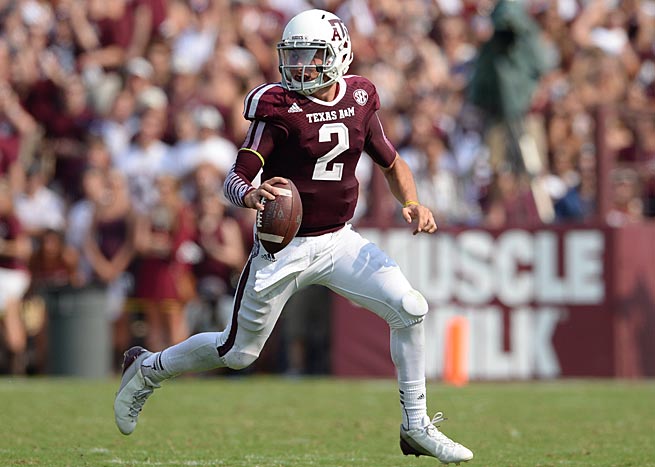 Coming into this season, the “sophomore slump” question was on everyone’s mind for Johnny Manziel. He came out of nowhere last season and led Texas A&M to a 11-2 season, including a 41-13 dismantling of Oklahoma in the Cotton Bowl. He also managed to break SEC records set by Cam Newton and Tim Tebow, as a freshman mind you. But this year there seems to be a new “Johnny Football” over in Tallahassee. Another redshirt freshman quarterback named Jameis Winston has his Florida State Seminoles undefeated and currently ranked second in the nation and likely to compete for a national title. But regardless of a team’s record, the Heisman Trophy goes to the nation’s best player. And despite the losses and his off-field issues (which are minor compared to some other players) Johnny Football is still the best player in college football.

I realize that Winston and Baylor’s Bryce Petty are undefeated, and Oregon’s Marcus Mariota only has one loss. But Manziel is beating them in passing yards (3313), passing touchdowns (31), rushing yards (611), and completion percentage (73%). The part of his game that he is not leading in is rushing touchdowns and he still has more than Winston – the Heisman frontrunner. Yes he has more interceptions than any of these other contenders, but he also has almost 50 more passing attempts than the next closest player, Mariota.

No Heisman Moment? Try Every Game

I will give Winston credit that his “Heisman Moment” was going into Death Valley and dismantling then third ranked Clemson 51-14 on national television. His thumping of then number seven Miami 41-14 also helped his candidacy. But Manziel has played this way week in and week out. Last year he snuck up on some teams, but this year everyone knows what he is capable of. Johnny has a target on his back and he is still putting up these numbers. Even in his two losses his team scored 42 and 41 points. And in both of those games he had over 500 yards of total offense.

Records Should Not Be the Only Factor

I am not trying to take anything away from Winston, but if the Seminoles had a loss, he would not be the number one contender. To me, the Heisman Trophy shuld not only go to the nation’s most outstanding player, but to the player that makes the biggest difference on the team. It should be a player whose team would not be the same without him. Florida State’s defense is third best in the nation and only gives up an average of 11.1 points per game – Texas A&M not so much. The Aggies’ defense currently ranks 88th in the nation and gives up 30.9 points per game. And A&M lost both of their games by a total of 11 points. The bottom line is that is Manziel had a defense close to the caliber that Winston has, he would be undefeated as well.

Put Attitude Aside and Base it Off Performance

Yes we all know about Manziel’s off-field issues. He is basically an average college student. I have heard people say he is a punk and a showboat, but you know what? He can do it. It is not really arrogance when he backs it up week after week. Manziel just got bad press for doing what every other college guy does. But put all the partying and money counting celebrations aside and base it off of his numbers and what he means to his team. If the people do that, it really is a clear choice.