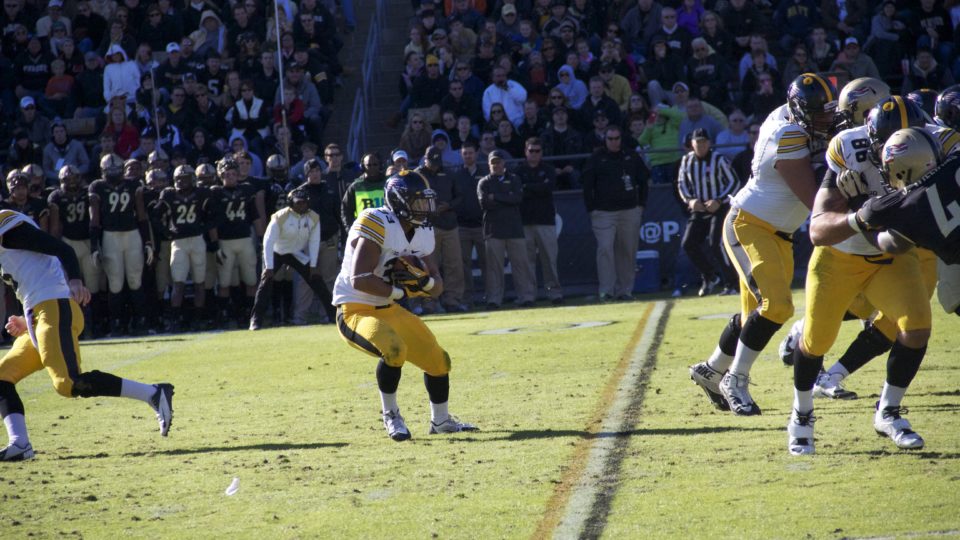 West Lafayette, IN – Running back Jordan Canzeri entered Saturday’s game against Purdue with just 173 total rushing yards on the season. He nearly surpassed that Saturday afternoon at Ross-Ade Stadium as he carried the ball 20 times for 165 yards and a touchdown as the Hawkeyes defeated the Boilermakers 38-14 for their sixth win of the season.

Canzeri is having a bounce back season for the Hawkeyes after suffering an ACL tear in the spring of 2012, an injury that sidelined him for his entire sophomore season after taking a medical redshirt.

The rushing effort of Canzeri was led by a dominant performance of the offensive line in the trenches, led by left tackle Brandon Schreff, who seemed to open holes for Canzeri all afternoon.

“The line blocked, the quarterback made the right calls, and it’s good to have the feeling that it’s never just one person,” said Canzeri. “The whole team and offense came together and knew we had to drive it down the field consistently to win the game.”

“It’s fun when you have holes that big, and when they open those holes it makes my job a whole lot easier,” said the New York native.

The Hawkeyes’ resurgent run game was not only led by Canzeri, but also by Damon Bullock who had 10 carries for 85 yards and Mark Weisman who had 30 yards rushing and a 4-yard touchdown run which put the Hawkeyes up 21-7 late in the third quarter.

When asked about Canzeri’s ability to quickly hit the holes opened up by the offensive line, head coach Kirk Ferentz said, “All of our backs are a little different, but Jordan is probably able to hit the whole a little quicker than some of our other guys.”

With a plethora of elusive halfbacks, anybody could have run through a Purdue defense allowing over 37 points per game.

“It’s tough when we have four running backs that we like to rotate in,” said Ferentz. “Finding the right batting order is the key.”

Iowa’s stellar trio of running backs combined for a season high 318 yards, well surpassing their season average of just over 180 yards per game. It’s also the most yards rushing by the Hawkeyes since amassing 365 yards against Minnesota back in 2002.