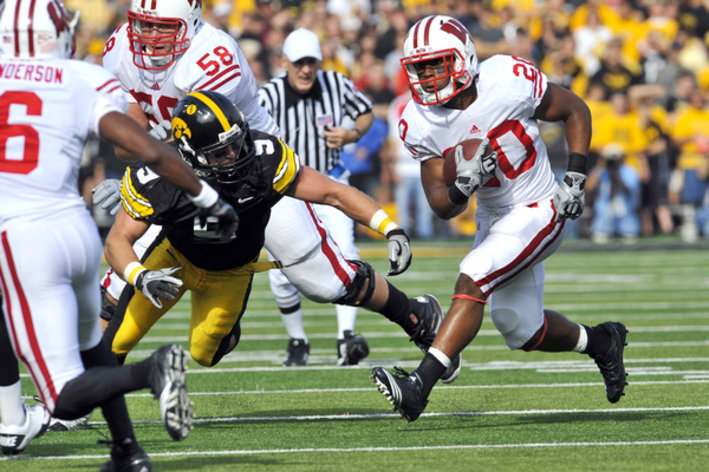 “For about fifty minutes there, we were really playing the way you want to,” Iowa coach Kirk Ferentz said about his team’s defense after the 28-9 loss to the Wisconsin Badgers.  “But you play a team like [Wisconsin] they’re going to get some [points] too,”

In the first quarter of the game, Iowa’s defense looked stellar as they held the Badger offense to only 25 total yards of offense.  In fact, the defense was solid throughout the whole first half, other than the 44 yard touchdown pass from Badger quarterback Joel Stave to tight end Jacob Pedersen on a crucial 3rd and 7.

It was not until the fourth quarter that the Wisconsin run game really took off.  In that final fifteen minutes of play, James White ran for 2 touchdowns, an 11 yard and 2 yard run.  White finished the game with 19 attempts for 135 yards and those 2 touchdowns.  Wisconsin went with the dual-threat at running back, as Melvin Gordon had 17 attempts for 68 yards.

“That team has got gaudy statistics in terms of yardage, points per game.  And we were competing very well with them,” said Ferentz.

In the game, Wisconsin totaled 362 yards of total offense, 218 of which came on the ground.

The Iowa defense was led by linebacker James Morris, whose 12 tackles, 1 sack, and 2 tackles for loss all led the team.  Safety Tanner Miller intercepted Wisconsin’s Stave early on in the first quarter.

The offense for Iowa was not able to capitalize on the early chances they were given.  With all 3 scores for the Hawkeye coming off of field goals, there was not much room for Iowa to pass or run.

Always a big part of the Iowa offense are the tight ends.  Ferentz makes it clear that getting the tight ends involved in the pass game is a focus every week.  However, Wisconsin was able to take away a good amount of the targets for the Hawkeyes.

“They made it hard for us, we were not moving the ball consistently.  We weren’t really running or throwing with great proficiency,” said Ferentz.

Iowa quarterback Jake Rudock and running back Mark Weisman, both key components of the Hawkeye offense, were shaken up in this game.  Ferentz stated that both did not finish the game due to precautionary reasons, and should be fine to practice come Tuesday.

Before exiting the game with a left leg injury, Rudock was 12-24 passing with 109 yards and an interception.  Running back Jordan Canzeri had 58 yards on 5 rushed, including a 43 yard run to spark the hometown crowd.

For the Hawkeyes, too much pressure on their quarterback and the inability to capitalize on good field position came back to hurt them in the end.

Following the loss, the Hawkeyes fall to 5-4(2-3 in the Big Ten) and will head to Purdue next week to take on a 1-7  Boilermakers team.