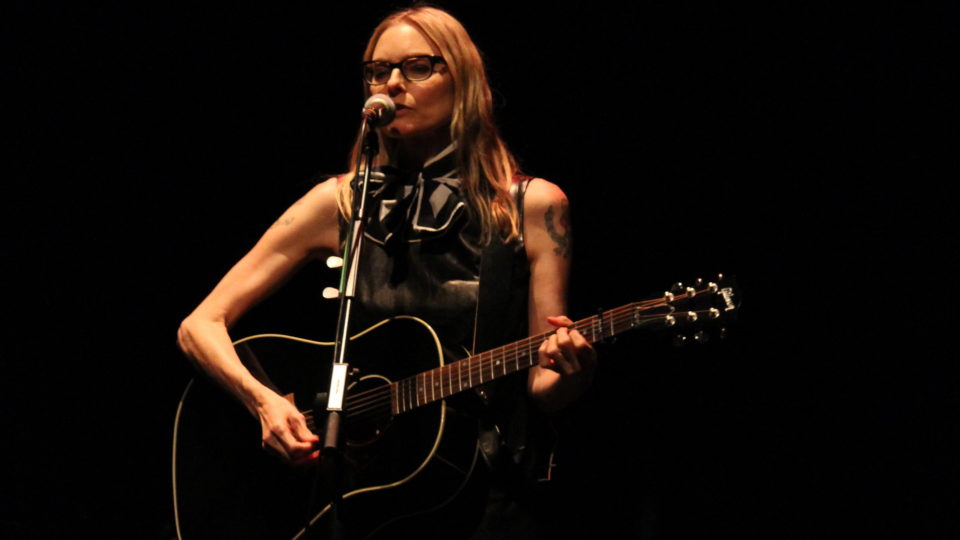 Snakes, Shrek, Priest shirts, and unclaimed royalties were just a few subjects of the many stories told by Aimee Mann and her music on October 19th at Englert Theater. I was privileged enough to be apart of the audience. People around the room couldn’t help themselves from laughing at Aimee’s light humor, bobbing their heads to her catchy tunes, and enjoying every bit of their night. 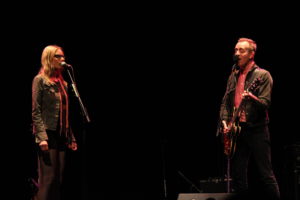 The night opened with her supporting act and fellow band mate: Ted Leo. Ted opened with simply his electric guitar and his voice. His smooth tenor voice soared throughout the room of the elegant Englert Theater and set the tone for what was going to be a spectacular night. Toward the end of Ted’s act, Aimee joined Ted for a few numbers that they perform together in their band, The Both. After some very fun, light-humored comic relief, that included talking about the irony of Aimee opening for herself, the duo belted out some tunes. The friendship between the two was evident and made for a very enjoyable duet performance of beautiful melodies and stellar harmonies.

After some much anticipated intermission, Aimee Mann took the stage to some much-appreciated applause, proving the audience was ready for her arrival. She opened her set, with just her and her guitar, then later added a bass played by Paul Bryan and  piano played by pianist Jamie Edwards. The trio sounded great together, not only in the instrument field, but the players sang tremendously as well as they belted out harmonies unlike any I’ve heard before.

Ted joined the stage again and Aimee shared a story about a time when she played one of her more famous tunes. Aimee was asked to play for Hillary Clinton when she was awarded the Liberty Award. After some banter back and forth between Aimee and Ted, Aimee shared that she recalled “Hillary Clinton swaying ‘sensually’ back and forth to her song.” After much laughter from the crowd, and some applause at the beginning of the song, she played her hit “Save Me.” 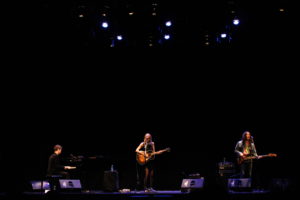 I would like to point out the musicianship of the artists that played. Personally, my outstanding musicianship award would be given away to the pianist Jamie Edwards who cultivated much applause throughout the night during his many piano solos. He blew me away as well as much of the audience away with his abilities, but I don’t want to stop there because every player on that stage was an artist and deserves just as big of a round of applause.

After a much-deserved standing ovation, Aimee came out for three more songs, even asking for an audience suggestion. Aimee Mann could not have given me a better event to attend for a Saturday night in Iowa City. With some well-written, heartfelt music, and a wonderfully light humored performance,  Aimee proved herself at the Englert Theater.

Check out a photo gallery from the show below, and to read Aimee Mann’s bio, find out tour dates, or get more information on her music, check out her website!