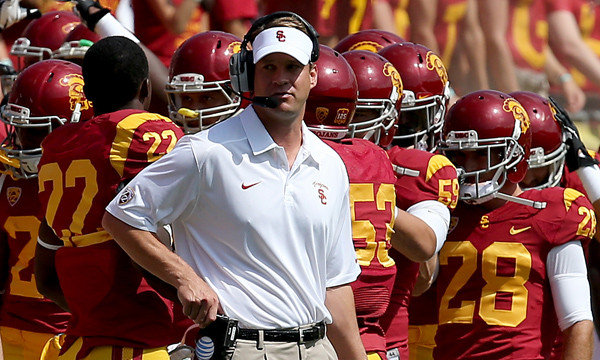 Head coach Lane Kiffin was fired in the early hours of Sunday morning, not long after USC suffered an embarrassing 62-41 loss at the hands of Arizona State Saturday night at Sun Devil Stadium in Tempe. In the game, the Sun Devils put up a staggering 612 yards of offense, and the Trojans committed four turnovers. The setback proved to be the final straw for Kiffin, as USC officials didn’t even allow the team to return back to campus before issuing the decision, but instead called Kiffin off the team bus following their arrival at LAX and relieved him of his duties.

The much beleaguered Kiffin went 28-15 in parts of his four seasons at the helm of the Trojans, but his team is 0-2 conference play for the first time since 2001, and were coming off an embarrassing home loss to the lowly Washington State Cougars just two weeks ago before Saturday’s setback in the Arizona desert. This is all it took for USC athletic director Pat Haden, who in the preseason had declared 100 percent support for Kiffin, to ultimately decide enough was enough. One could argue that Kiffin should have been let go after last season. A season in which the Trojans were the preseason number one team in the country, and failed to deliver on the hype by limping to a 7-5 finish and ending with a 21-7 loss to Georgia Tech in the Sun Bowl.

Kiffin showed moments of brilliance in Los Angeles during his three full seasons, but the pressure had clearly been building for the last few years, and finally boiled over on Saturday night. It has not just been the loses however that ultimately doomed Kiffin, but rather consistent poor play on both sides of the ball, and loss of team confidence in him as evidenced by a team only meeting held by All-American wide receiver Marquis Lee following the 10-7 loss to Washington State. It has also been a struggle on the usually strong USC recruiting trail both nationally and locally, with red-hot UCLA and coach Jim Mora suddenly snatching up all of the local talent. A big part of this struggle has been due to the NCAA sanctions imposed on the program following the Reggie Bush scandal, which resulted in severe scholarship limitations that have drained the Trojan’s depth chart and drove top recruits elsewhere.

It seems that a black cloud has followed Lane Kiffin everywhere he has gone in his head-coaching career. He lasted just four games into his second season as head coach of the Oakland Raiders, before being fired by owner Al Davis following many disagreements between the two, including Kiffin’s opposition to drafting JaMarcus Russell with the number one overall pick in 2007. Kiffin then coached Tennessee to a 7-6 record in 2009, but his time in Knoxville is much better remembered for such controversies as falsely accusing then Florida coach Urban Meyer of committing NCAA recruiting violations. Following Pete Carroll’s departure for the Seattle Seahawks, Kiffin jumped at the chance to return to USC, angering many in Knoxville who now viewed him as both a traitor and a liar.

Offensive coordinator Ed Orgeron has been named interim head coach following Kiffin’s firing and now has the task of picking up the pieces in Los Angeles. Many have already declared this a lost season for the Trojans just five games in, and view USC as a fundamentally broken program as it currently sits. The consensus is that this ultimately was the right move for the Trojans to make, as the USC job should be a highly coveted opening come the off-season. The question still remains however; will anybody be able to deliver USC football back to its glory days? Clearly that man was not Lane Kiffin.