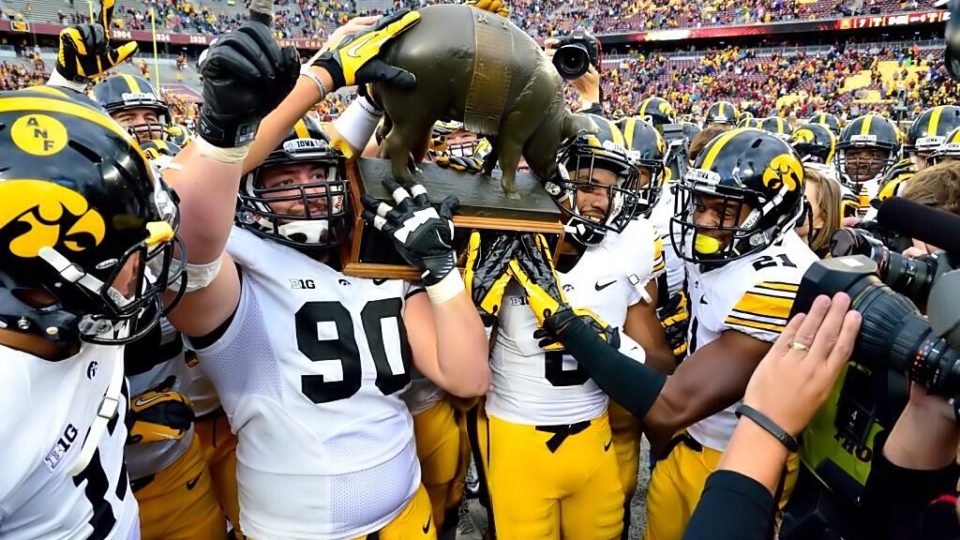 MINNEAPOLIS—Iowa brought in Greg Davis to bring an exciting, up-tempo pace to the Iowa offense, but today in a 23-7 victory, the Kirk Ferentz style of play crept in and took center stage.

“We couldn’t move Iowa…They handled the line of scrimmage on both sides of the ball better than we did.” Minnesota Head Coach Jerry Kill said.

Ferentz ball isn’t as exciting as what we saw against Northern Illinois and Missouri State, it doesn’t score as many points, but it wins games.

Iowa dominated the line of scrimmage on both sides of the ball by outpacing Minnesota 246 to 30 in rushing yards. No, that isn’t a typo, Iowa rushed for 216 more yards than Minnesota.

The number of rushing yards isn’t even the most impressive part.

Once again proving to the fan base that sometimes boring is better, the rivalry game went on to show that if Iowa wants to succeed it is going to have to do what it knows. It knows how to grind it out.

Weisman carried the load with 24 carries for 147 yards and after the game said that the identity of this team isn’t a set thing, but the play today showed what they can do.

“We know we have to be a physical football team if we want to win games.”

Yes, loathing that word coming out of Ferentz’s mouth is okay. When a team is not playing well it is viewed as a cop out. It’s a staple of Ferentz ball though, playing team defense and pounding the ball and controlling the line of scrimmage.

This team is now 1-0 in the Legends division and has showed marked improvement over their 4-8 season last year. They’ll have to continue to play Ferentz ball if they want to continue winning games in the conference.

Against Michigan State it fits in perfectly, the Spartan offense has, to put it nicely, been terrible. Iowa playing pound it out, relatively mistake free, and dictating the pace will give them a solid advantage over a team that has had major trouble at finding a viable quarterback.

As boring as it is to punt on fourth-and-two from the 39 yard line, it helped turn the tide early by pinning Minnesota deep and giving them no breathing room on offense.

One place that they must improve, and Ferentz admitted needs improved, is the ability to finish with points. Citing the early turnover from Minnesota that led to zero points.

Tighten that up and Iowa has the potential to double their win total from last year and surprise some teams at Kinnick stadium.

If Iowa can learn to finish with points and pound out 400 yards of offense in a few more games we may see Iowa bowling come January.