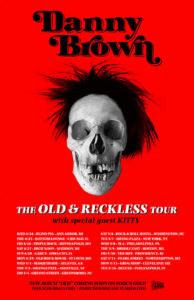 Danny Brown, in support his forthcoming album, Old, sold out an energetic Gabe’s on Sunday. The venue was buzzing with excitement throughout the day and when the show finally started the place was booming.

Local act AWTHNTKTS were the first act of the night. They have been showing moments of great potential in the shows they have done recently and their knack of opening for awesome shows (Killer Mike and now Danny Brown) is surely helping them out; they performed very well.

The Old and the Reckless Tour has been running for a good portion of the spring. Danny Brown has played with Bauuer and has performed at SXSW and Coachella this year. On Sunday, and on this current leg of the tour, Kitty has been opening for Brown. Her song “Okay Cupid” has garnered some major attention and her live shows are always an experience. Her performance at Gabe’s was sensual, confident, and it had the venue pumped and ready for more.

Danny Brown came on soon after Kitty. The lights dimmed and SKYWLKR dropped his trap-influenced tracks to hype the crowd. Danny flew right into tracks as soon as he got on stage. In a jet-like pace he went into the songs because of the time restrictions.  Brown’s stage presence is phenomenal; he is humorous, flamboyant, and intelligent. His lyrics can be hysterical and also gravely serious. This concoction, along with SKYWLKER’s knob manipulating techno prowess, deliciously manifests as wonderful performance. You can tell they are enjoying themselves and the vibe goes right into the crowd beautifully. Until you experience Danny Brown live for yourself, no YouTube video or recording is really going to do it justice. He sounds better live than on his albums and a lot of that has to do with the incredible talent and attention to detail, plus the atmosphere that a Danny Brown/SKYWLKR show cultivates.

The only draw back from the show was the brevity of the set and the few people at the show who thought they were better than the momentum of the crowd (you know, the guy that thinks the space he occupies is solely his kingdom) but that was never enough to take away from the performance. Danny sampled a few new tracks off of Old and plenty of crowd favorites. “I Will,” “Blunt after Blunt,” “Radio Song,” and “Monopoly” were all there; as were a few older gems. Danny left the stage with the crowd eager for more. While it’s not the best Danny Brown performance I have experienced, it was a damn good one made all the more special by the energetic crowd and the fact that it was in Iowa City. Check him out if you get a chance, Danny Brown is only going to get bigger and his shows are like no other hip-hop performances you will see.