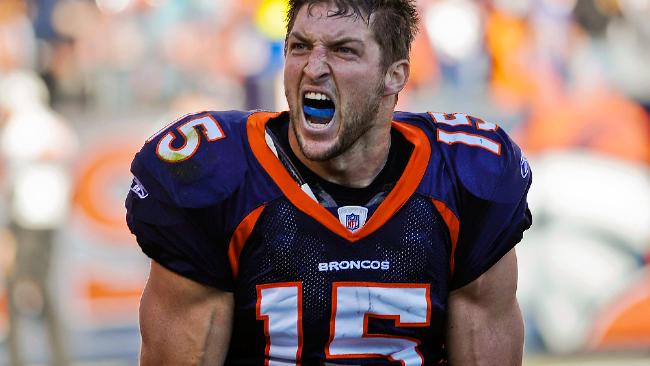 If you were asked to sum up everything you know and understand about Tim Tebow in a single word, it would be bizarre. Bizarre that as the backup quarterback on Florida’s 2006 National Championship team, he received as much recognition as freshmen as senior, starting quarterback Chris Leak. Bizarre that the 2007 Heisman trophy winner who set SEC records in passing efficiency, yards per pass, total yards and total touchdowns was widely predicted to be drafted as something other than a quarterback in the 2010 NFL Draft. Bizarre that the quarterback who took a 2-5 Denver Broncos team to the divisional round of the 2011 playoffs would be utilized the following season as nothing more than a punter’s personal protector by the 6-10 New York Jets.

And that isn’t even the half of it.

The story on Tebow is even stranger off the field. Part of his stardom is his controversial religious observance, being the son of two Christian missionaries. As a college superstar Tebow is remembered at the University of Florida for the numbers of specific bible passages written on his eye paint for every game, a practice banned following his graduation in a rule dubbed “The Tebow Rule”.

His profound observance is not only embedded in everything he does, but Tebow is also judged for his candor off the field more than any other athlete. His relationship to his religion is very “in your face” at times, that makes many in the general public uncomfortable.

With news of his release from the Jets this week, in addition to the both CFL and Arena football teams inquiring for his services, Tebow is the ultimate flash in the pan. So often in music or film we see bands or actors rise with a single hit, before exiting the stage a moment later. While there have been brief sensations in sports before, nobody did it like Tebow.

What makes Tebow so perplexing is that there is a major discrepancy between those who believe he has ability to succeed and those who don’t. He was publicized in the weeks prior to the 2010 draft by changing his throwing motion, as a response to many who felt he held the ball too low. Additionally, many believed he would never flourish at the professional level because much of his success at Florida consisted of him bulldozing smaller defensive players, something he would not be able to do in the bigger, faster NFL.

The questions that surrounded Tebow the second he was selected by the Denver Broncos made him the ultimate underdog. One of the greatest college football players to put on a helmet suddenly became a player that, despite his immense will power, was constantly doubted as an NFL player. ESPN began foaming at the mouth for Tebow while he was at Florida and worldwide media attention skyrocketed when he willed Denver to six straight victories and a playoff berth in 2011.

But now Tebow sits on the outside looking in, perhaps wondering whether he joins a list of outstanding college players that could never transition to the pro game. But, if anything counts in his favor it is his determination and will power. These major intangibles, which are his greatest assets, led to two National Championships, a Heisman trophy, and control of the Denver locker room even before he usurped Kyle Orton five games into that infamous 2011 season.

In the weeks and months ahead, we will see if someone will willingly embrace the challenge of the player and the media attention that surrounds him. However the Tim Tebow story ends, we can probably expect it to be as bizarre as the way it began.