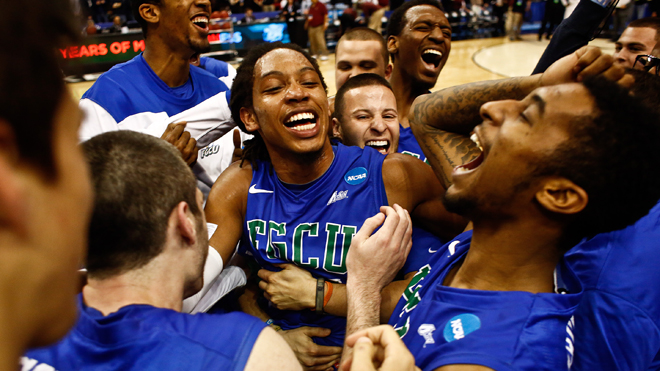 Let’s start with the facts from this school that has a campus that looks a lot like paradise. This school was founded in 1991. Yes, I said 1991, so it has only been around for twenty one years.  Only 3,675 students reside in the on-campus housing at the university and it is located in South Fort Myers, Florida, which is probably one of the best locations in the county for a college campus. Moving on to the athletics; they moved to Division 1 so recently that this is only their second year of postseason eligibility, which makes it such a great story.

Every year there is a cinderella story, or even a few, but this is the definition of a cinderella story. They are a fifteen seed in the NCAA tournament, which means they were matched up against a two seed to begin with. Unfortunately for one of the best teams in the Big East, that happened to be Georgetown.

Usually when these underdogs get off to a good start against a top team, the top team will pull away because overall talent ultimately takes over. But this was not the case here. It almost seemed as if the more talented team was the fifteen seed, and they looked that way from start to finish. They played with complete confidence against the Hoyas, and were not scared at all of the basketball power. With an alley-oop on seemingly every other posession, this team was very confident and that is what propelled them to the first round victory.

They squared off with San Diego State in the next game, who is a lot less talented than Georgetown. This game was close throughout until the latter part of the second half when the Eagles pulled away with more alley-oops and dunks. They were playing with ultimate confidence and nothing was going to stand in their way of winning that game.

But as I stated earlier, what is odd about both these upsets is that the Eagles looked like the superior team in both games. They have athletes all over the floor at every position. Their two star players are Sherwood Brown and Brett Comer. These are two very likable players for their own reasons.

Sherwood Brown has two children that he takes to every game and says that they are the most important thing in the world to him.

Brett Comer’s father passed a few years ago, and Comer has been dedicating this miraculous tournament run to him.

America has simply fallen in love with this team and if your team is out of the tournament, there is a very good chance that you are cheering for the Eagles to advance. They are a very fun team to watch and there is almost nothing not to like about them.

Another thing about this team, is they have fun playing the game of basketball. They are all dancing, cheering for one another, and celebrating together when they make a good play. This team is playing with no pressure, and that is showing by how loose they are playing.

Florida Gulf Coast will play Florida in the Sweet 16, and I am sure everybody outside of Gainesville will be rooting for the Eagles.