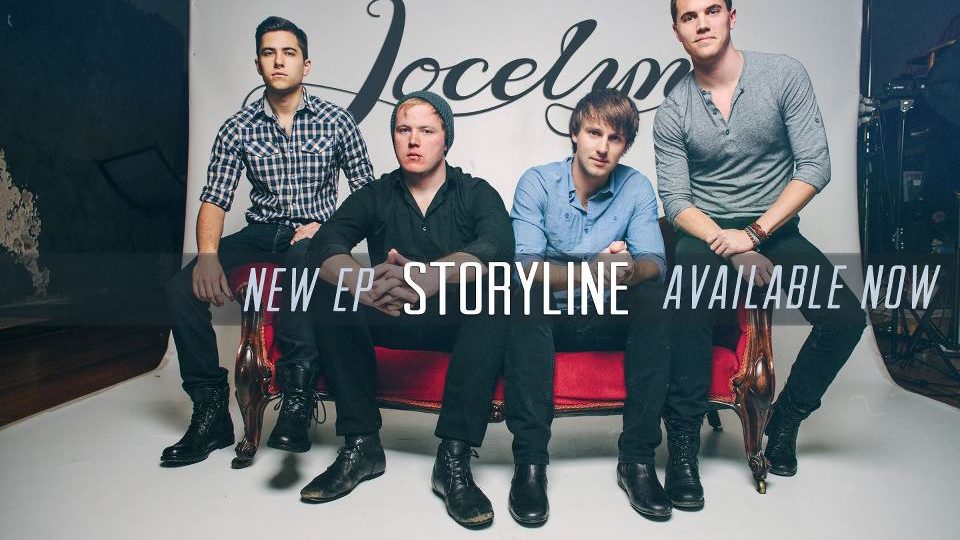 Jocelyn fans lined the windows outside the Blue Moose, (Jocelyn’s favorite Iowa City music venue), waiting for the doors to open for their CD release show, which the band told me they were “stoked” to play. (Their new EP Storyline, dropped the evening before the show, February 8th). Many of the girls had been waiting there for hours, some having traveled from as far as Ohio to see the show.

As I waited for my interview time to roll around, I got a chance to observe some of the amazing dedication Jocelyn has to their fans. Landen Boyer, lead vocalist and songwriter of Jocelyn, was, and had been, outside in the cold talking with all the fans. He even went so far as to go to the band’s van and get his own coat to pass along the line to fans who were cold (with visible goosebumps). If all that wasn’t enough, he personally made sure to hug every single fan in line. Right off the bat, I began to see the strong relationship this band has with their fans.

Now you may have no clue who Jocelyn is, but that is all about to change. The band is made up of Iowa natives Landen Boyer, Alex Wiese, Josh Adams, and Steve Lydick. Jocelyn is relatively new to the music scene— they’ve only been together for 1 year—and they dropped their first EP last June.

I asked bass player Alex Wiese where the name Jocelyn came from, the response I got was far more impressive than some cliche reference to a classic rock song, “We’ve done a lot of work with non-profit groups, anti-suicide groups like To Write Love On Her Arms. So we wanted to kinda like branch off of that, and be something more than just a band with a “cool name.” So basically, Jocelyn is whoever people need her to be.”

The band’s connection with their fans is so important to them, that they actually have a phone number that you can call or text at anytime, and one of the will answer or respond as soon as humanly possible. I asked about the story behind the number, “So the reason we have the band phone number is because we believe that everyone has a story, and it’s important that somebody is always listening,” says Wiese.

The band members have traveled to every corner of the country, following popular tours to get their name out there, and have passed out 70,000 copies of their promo cards with the phone number on it.

“It’s a lot of hard work, but it’s definitely something we’re  successful at,” Boyer tells me. As a result of that promoting, the boys from Jocelyn told me they had fans traveling impressive distances to come see their show in Iowa City. Some were coming all the way from Atlanta, and another group of fans were flying in from New Jersey. Very impressive for such a newly established band.

Some of the major musical influences Jocelyn lists are Cartel, Anberlin,  A Change of Pace, Search the City, and Take Cover.

“Anberlin is how I sing. And the songs themselves are more Cartel, and how they’re written.” says Boyer. He then shared the bands songwriting process with me, “Sometimes the songs will start with a guitar idea that Steve had, and then I’ll put melodies and framing to it, and we’ll kinda spice it up after we have the bass and chords and the lyrics down.”

In discussion of what’s next for the band music-wise, Alex had this to say. “I’d rather put out a single every month, than a full length once a year.”

In addition, guitarist Steve Lydick told me, “For everyone we’ve known and talked to, our experiments have always basically shown that it makes more sense to make sure you have stuff coming out as often as possible.”

The band also told me that although they currently do not have a name for their fans, the are eager to get some suggestions from their fans. “I like Jocelynites,” Landen told me, but based on his facial expression, Alex wasn’t having it. The band is waiting for the fans’ feedback, and are definitely welcoming it.

I wanted to end the interview by getting to know them even better, so I asked some more specific questions. Boyer and Wiese we’re in agreement that if they could co-headline with any band in any venue, they would play with Fall Out Boy at The Metro in Chicago. (Personally, I think is a very good choice). As for when they’ll know they’ve made it? “Have Justin Bieber open for me. That’s the goal,” Alex told me with a joking grin.

Jocelyn is made up of some very talented and down right nice guys, who truly care for and appreciate their fans. Jocelyn is definitely a band alternative pop fans should check out.

Pick up your own copy of  Jocelyn’s first EP, To You And Yours on iTunes here , their newst EP, Storylinehere, and get  the band’s self-guaranteed attractiveness-increasing merch here.