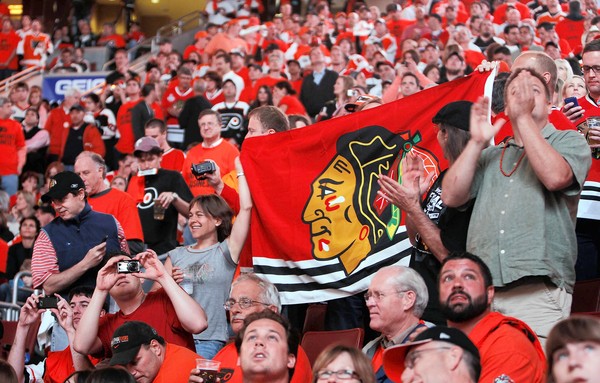 No one likes a fair-weather fan.

I’m usually the first to criticize a peer for conveniently jumping on a team’s bandwagon amidst a wining streak or following a championship victory.

But I must concede, I’m guilty of this same shallow behavior when it comes to the Chicago Blackhawks.

The Hawks’ record-breaking start to the 2013 campaign has been widely publicized and duly noted by their fans and opponents alike. Through 20 games, they have earned 37 points, winning an astounding 17 games and suffering only 3 overtime losses.

As the Blackhawks continue to produce points on the ice, their play has also sparked a resurgence of interest among the fair-weather crowd, including yours truly.

I’ve always myself identified as a Blackhawks fan, but hockey has always taken a backseat to baseball, basketball, football and soccer for me. In fact, I typically don’t tune in to their games on a regular basis until the postseason begins. However, my attention has steadily shifted over the past few weeks due to the incredible performances by this Blackhawks team

As of today, just two months into the season, I’ve watched more Blackhawks games this year than I did during their entire 2011-2012 regular season campaign. Granted, I’ve only watched four games in their entirety (and fragments of about three more), but for an admittedly pedestrian hockey fan, this is a significant statistic.

If the growing display of Blackhawks apparel worn around campus is any indication, I’m not the only one who has been captivated by the Hawks’ thrilling undefeated streak. But with the way this team has been playing, can you blame us? Obviously the historic stretch is impressive, yet this is not merely due to the fact that they’ve avoided defeat, but how they’ve managed to do so.

Sure, head coach Joel Quenneville’s squad hasn’t exactly been dominant thus far, but what the club lacks in dominance, they compensate with consistency and suspense. Nearly every game has been a nail-biter, as exemplified by their eight overtime games, five of which have been decided by shootouts. Their knack for squeezing out wins in dramatic fashion has made watching Hawks games addictive, qualifying as must-watch sports entertainment. Needless to say, the Blackhawks bandwagon gains more and more passengers with each exhilarating victory.

As one of the famed original six members of the NHL, the Chicago Blackhawks are a storied franchise, not only in hockey, but in all of major professional sports. Playing in arguably the greatest American sports city, they certainly aren’t shorthanded in terms of fan support. But considering the reliably disappointing nature of other Chicago sports teams in recent years, the Blackhawks are deservedly the talk of the town.

The more avid Hawks fan is likely to dismiss those who have recently climbed on-board during this remarkable run, as they did when the team won the Stanley Cup in 2010. Nevertheless, I encourage them to accept us this time around, if not simply for my own sake. Even though I am violating my own decree against fair-weather fanaticism, let’s face it: rules—not unlike records—are meant to be broken. So let’s make an exception for those hopping on the Blackhawks bandwagon and enjoy the ride while it lasts.