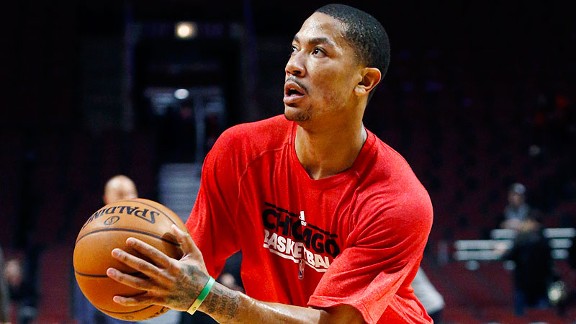 Ever since Derrick Rose sat down with USA Today on February 12, a lot has been made about whether or not the Chicago Bulls point guard will return this season.

Instantly, ESPN and every media outlet zeroed in on the line, “It could be next year.” Everything was: Derrick might not return? Will he ever be the same? Is his ACL still bothering him? Do the Bulls have any control over his return or are his supporters running the show?

The bigger question is: should he?

The first thing to look at is where the Chicago Bulls currently stand in the Eastern Conference. They are currently 32-25, 6th place in the East and 4 games behind the Indiana Pacers for 2nd.

Not bad, but not great. The Bulls have a good chance to climb back up in the standings with about a month and a half remaining in the regular season. This team that was essentially put together to hold the Bulls over until Rose could return has exceeded expectations so far, being within striking distance of 2nd place 56 games into the season. However, there are some very good teams ahead of them.

The second thing to look at is how healthy the Bulls currently are. Kirk Hinrich is day-to-day with an elbow injury that has caused him to miss the three of the last five games, Taj Gibson was just diagnosed with a sprained MCL (although he claims it’s just a minor setback) and Joakim Noah has been battling plantar fasciitis.

This Bulls team has struggled with injuries all season long, especially as of late. Hinrich has been unable to stay healthy for extended periods of time and the recent injury to Gibson hurts the Bulls bench immensely. The so-called “Bench Mob” of last year is gone and the Bulls have had to rely on the inconsistency of Nate Robinson, Marco Belinelli and Nazr Mohammad. The only two players of the original “Bench Mob” that remain are Taj Gibson and Jimmy Butler. The depth of the bench is gone.

Finally, look at the teams in front of Chicago in the standings: Indiana, New York, Atlanta, and Brooklyn. Two, potentially three of these four teams can beat the Bulls in the playoffs – with or without Derrick Rose.

The Indiana Pacers are the only team in the Eastern Conference that I think are capable of beating the Miami Heat. They are very talented defensively, currently leading the league allowing just 89.6 points per game. Unless Rose is in full, mid-season form by the time they face the Pacers, I give them a 45% chance in a 7-game series. Additionally, the Knicks and Nets are no slouches either. Even with Rose, I give the Bulls a 60-65% chance in a 7-game series.

With March fast approaching and the season ending on April 18th, Rose would have just abut a month to get Derrick back into form before the playoffs begin and everything I’ve seen during the recovery process leads me to believe that it will take much longer for a month to get back into form. Unless Derrick Rose is Derrick Rose right away, the Bulls simply aren’t a good enough team to contend for an Eastern Conference Championship, let alone a NBA Title.

When you look at everything mentioned above, I find it hard to believe that it would be beneficial for Derrick Rose to return this season. As it is now, the Bulls are a playoff team, nothing more. Given the current state of the team and the talent of the teams ahead of them in the standings, the addition of Rose makes them a slightly better playoff team. Why risk the health and future of your franchise player on a slightly higher seed?

If you ask me, accept this season for what it is – a bridge year – and wait until next season to bring Derrick back.