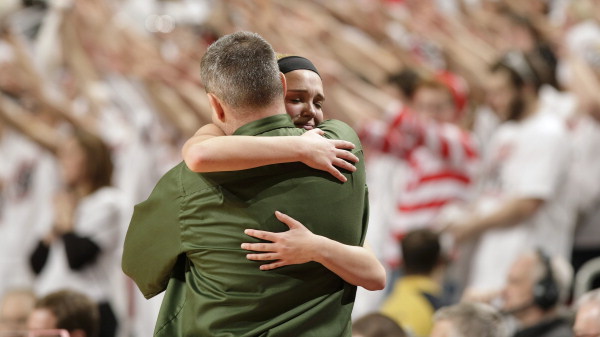 Mason City hit 14 threes, a state tournament record, to knock off the defending champion Trojans 72-53 at Wells-Fargo Arena. Mason City will face West Des Moines Dowling Catholic on Friday. Dowling advanced to the semis with an overtime win over Des Moines East, hitting a three-pointer as time expired in regulation to force the extra session.

Buckley said the Mohawks figured out early it was going to be a special night in Des Moines.

“I think after like the fifth three, we were like ‘Alright, let’s go,'” Buckley said. “We were so excited, we were amped up, and we were just having fun out there.”

Mason City hit 10 of 13 three pointers in the first half to claim a 40-27 lead at halftime. The Trojans came out in a zone in the first half, and the Mohawks were able to find open looks. Mellman said they realized early they would be able to get open looks on West’s defense.

“Our strong point on offense isn’t necessarily when teams play a zone, but we definitely shot our way out of it,” Mellman said.

The Trojans would continue to battle, but every time it appeared West was mounting a comeback, a Mohawk three-pointer would stop the run. Mason City’s lead did not drop below 10 points in the second half.

The loss marked the final appearance in a Trojan uniform for future Iowa Hawkeye Ally Disterhoft. Despite drawing the full attention of the Mohawk defense, Disterhoft poured in 31 points, and did everything in her power to keep the Trojans in the game.

Disterhoft said she believed the Women of Troy played a solid game, but stood little chance against the three-point shooting barrage of the Mohawks.

“Coach was saying that he didn’t think we got outplayed, we just got outshot,” Disterhoft said. “Basketball’s a game of runs, and when they went on that first run, it was hard to come back because they kept making them.”

West head coach B.J. Mayer said, despite the loss, Disterhoft ended her career in the right place — the state tournament.

“Mason City knew coming in what kind of player she was, and she was able to do the things she did tonight all year long,” Mayer said. “Ally really deserved to go out down here (in Des Moines), and obviously, we’d like to still be playing, but for her to end her career, it’s great down here and put on a show for all the fans.”

“It’s been an amazing experience, and I wouldn’t want to play for any other team or any other school,” Disterhoft said with red eyes. “I’ve played with some great girls, played for some amazing coaches, and I couldn’t have asked for more,”