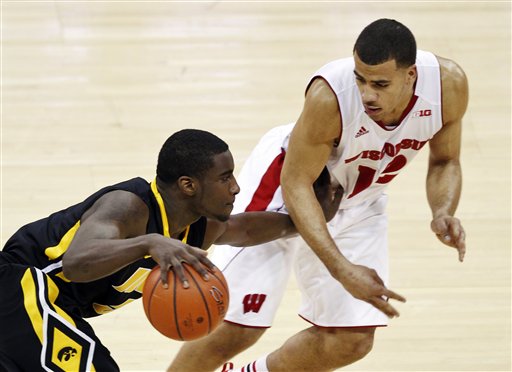 In the end, the Iowa Hawkeyes just ran out of gas.

After roaring back from an 11-point first half deficit against Wisconsin Wednesday night at the Kohl Center, Iowa had a nine point lead with 6:18 to go in the game. But the Badgers surged back late, and claimed their first victory over the Hawkeyes since 2011, 74-70 in double overtime.

After looking lackluster in the opening 15 minutes of the contest, the Hawkeyes came to life after a technical foul was assessed to head coach Fran McCaffery. Iowa went on a 12-3 run to close the halftime deficit to 2.

McCaffery said he wasn’t trying to get a technical, but was pleased with his team’s response regardless.

“Most of the time over the years, the technicals I’ve been given have been on purpose, and that one wasn’t,” McCaffery said. “I think we did play better after that, and that’s a good thing.”

A 22-11 start to the second half gave Iowa their biggest lead, and the Hawkeyes seemed to be on their way to a signature victory. But the Badgers had one final run left in them.

Wisconsin tied the game with 1:24 to play on a layup by Ben Brust. A jumper from Mike Gesell would miss the mark, but the first Badger pass was intercepted by a seemingly invisible Aaron White. White would make a layup and be fouled in the process, giving Iowa a 58-55 lead with 45 seconds left. However, the Badgers struck back, as Traevon Jackson hit a three-pointer after two offensive rebounds from center Jared Berggren. With 21 seconds remaining, the Hawkeyes had one last chance to win it in regulation. Josh Oglesby had a good luck at a game-winner, but the ball rattled out as time expired. Oglesby’s miss continued late-game struggles for the Hawkeyes, who have not hit a shot to win or tie a game in the final ten seconds since November 2008.

McCaffert said Jackson’s make, which bounced around the rim before falling, and Oglesby’s miss were symbolic of Iowa’s season thus far.

“There’s no question about it. That’s the way our season has gone, and it’s unfortunate,” McCaffery said. “At the same time, we missed 49 shots, and we have to just have to make our shots.”

Each team only scored four points in the initial overtime period, one in which the Hawkeyes never trailed. This time, Wisconsin had the last shot to win, but threes from Berggren and Mike Bruesewitz missed the mark to send the game into double overtime.

The Hawkeyes’ fate reversed in double OT, as the Hawkeyes never led in the game’s final five minutes. A three-pointer from Sam Dekker gave the Badgers a 67-64 lead with 1:37 to play, and the Badgers hit all six free throws in the final minute to seal the victory.

Wisconsin head coach Bo Ryan said he was proud of the way his Badgers battled back from the brink of defeat.

“Both teams were playing so hard, and we both made some mistakes at crucial times,” Ryan said. “Shot selection became a little scary, but we just hung on, hung on, and hung on some more, and to close that gap when we were down nine to get it into the first overtime, that was really gutsy by our guys.”

Iowa guard Devyn Marble continued his struggles, scoring just two points on 1 of 10 shooting in 18 minutes. McCaffery, though, believed it was just a night where the shots didn’t go in.

“I thought he was in flow, because he was shooting the ball, he was driving, he was attacking, but nothing went down for him,” McCaffery said. “I thought at least he was aggressive early, and that’s what I wanted.”

The Hawkeyes return to action Saturday afternoon at Carver-Hawkeye Arena against Northwestern, a team Iowa defeated soundly in Evanston in January.