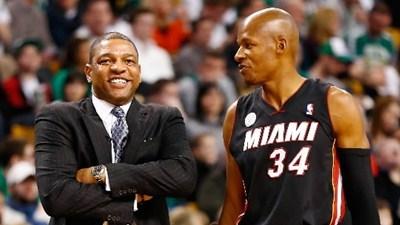 Of the many the life changes for this writer when college began last August, doing my own laundry was near the top of the list. For the first eighteen years of my life, my loving, caring mother did it for me. Whether after the first game of a back-to-back, or just accumulation over a weeks clothing, my piles of clean clothes would magically appear in my bin the next morning. When it finally came time to sort my colors from my whites, add detergent and press the buttons on my own, I was surely taking my first steps into a larger world. Once the process was over, it was apparent that the soapy water went to work on even the toughest of stains, and left my clothes squeaky clean.

Two months prior to my first personal load of laundry, and a night after a ringing “Lets Go Celtics” chant echoed through the TD Garden during the final minutes of a blowout loss, the Boston Celtics trudged back to Miami for a fateful game 7 of the Eastern Conference Finals against the Miami Heat. For what seemed to be the final time, the cagey veterans rose to the occasion and went pound-for-pound with the young guns from South Beach. After heading into the fourth quarter in a tie game, the Celtics ran out of gas, and Miami roared to life, exercising their personal Celtic demons of old en route to their second NBA Championship in franchise history.

In the closing minutes at American Airlines Arena, Celtics coach Doc Rivers removed Paul Pierce, Kevin Garnett and Ray Allen from the game. In front of a (surprisingly) classy road crowd, the four men embraced, understanding that retirement and free agency loomed for the three future hall of famers. The Commonwealth collectively felt that night, along with the rest of the league, that the Big 3 era in Boston was over.

But, when free agency began in the summer of 2012, Celtics GM Danny Ainge tried to bring the trio back for year six of the initial three year plan that brought Allen and Garnett to Boston in 2007. Ainge immediately called Garnett and convinced him to return to the green. Boston then used their team option on longtime Captain Paul Pierce, who will undoubtedly have his 34 atop the Garden rafters in a few years. That left Ray Allen, the greatest sharp shooter to ever pick up a basketball. Along with his well-publicized rift with point guard Rajon Rondo, Allen was also irked by Rivers’ decision to bench the sniper late in the season, in favor of defensive ace Avery Bradley. A month following their last stand in Miami, “Jesus Shuttlesworth” signed a contract with the Miami Heat, the Celtics’ biggest Eastern Conference foe.

When both the news and publicity followed Allen to South Beach, many of the Celtic family were stunned. Kevin Garnett cut all ties of communication, and Doc Rivers was disappointed, feeling that Allen’s decision was less of a basketball decision, and more of a personal one. For everyone involved, the contrast was apparent: instead of wearing a white 20 jersey, Allen opted for a black 34.

Ray Allen’s decision to leave Boston was a stain in the minds and hearts of the many Celtics fans. So, when the Heat made their initial appearance in Boston, both the broadcasters and the blogs questioned the reaction the sharp shooter would receive from the passionate fan base. This question of loyalty, especially in Boston, is not new. Most recently, this same question was asked when Johnny Damon returned as the centerfielder of the New York Yankees, or when Manny Ramirez returned to Boston with the Los Angeles Dodgers.

To me, every time the same question is posed, it’s perplexing. Like many passionate cities, there is an unwritten rule about returning players. In the Boston area, it’s pretty simple:

Boo them if they come back with a hated rival.

In the words of Bill Simmons, one of the most famous Boston sports loyalists, “Boston fans hate the Yankees, we hate the Canadiens and we hate the Lakers. It’s in our DNA.” This idea holds true with responses to fan favorites joining one of these three organizations. However, seeing the recent history with the Miami Heat, pretty soon they’ll be added to this list, too.

Reggie Jackson once stated that “Fans don’t boo nobodies.” The question of whether or not to boo returning players come with the most polarizing, most talented athletes in the world. The reason why fans boo is because they are constantly displaying their passion. At its core, the emotion is derived from the vested connection with a team. On a nightly basis for 16, 82 or 162 games, people are glued to their seats to watch the best athletes in the universe compete on the biggest stages. On these nights during the year, people magically become on a first name basis with multi millionaires.

As the games and years go by, and meaningful memories are forged, cities create a bond with their teams. So, after five years of devotion, Ray Allen became one of our guys, for better or for worse. Fans boo because they recognize that they fought the battles too during those playoff runs- the players undoubtedly feed off of the energy in the building. The outpouring of emotion on the floor is initially generated by the 6th, 10th or 12th men. So when a fan favorite leaves town amid a flurry of harsh reports? The “teammates” are going to be upset. And rightfully so.

When Allen, donning a Black 34 jersey walked calmly to the green scorers table, some fans openly thanked him for his five years in Boston. Others, however, remember the summer divorce that drove the guard to the enemy, and “thanked” him for his actions. (Rightfully so, the cheers greatly outweighed the boos following the video montage produced by the Celtics) Sports aren’t linear like a contest with a beginning and an end; it’s cyclical. New players arrive in our hearts and minds when the old players leave town. The catch is that when the players leave, we as fans still remember their presence and their memories- positive or negative.

While the Garden’s response to Allen Sunday afternoon was hardly surprising, I wonder how Boston will react when Allen will eventually walk towards the podium in Springfield, Massachusetts, as a new member of the National Basketball Association Hall of Fame. While the Commonwealth’s reaction towards “Shuttlesworth” may be decided by the measure of success in these next few seasons in black and red, we always remember what he did in green and white.

For Celtics fans at the moment, it seems that the stained green is mixed in with the rest of the colors. However, when the wash and rinse cycle takes place, all the stains will magically seem to disappear.