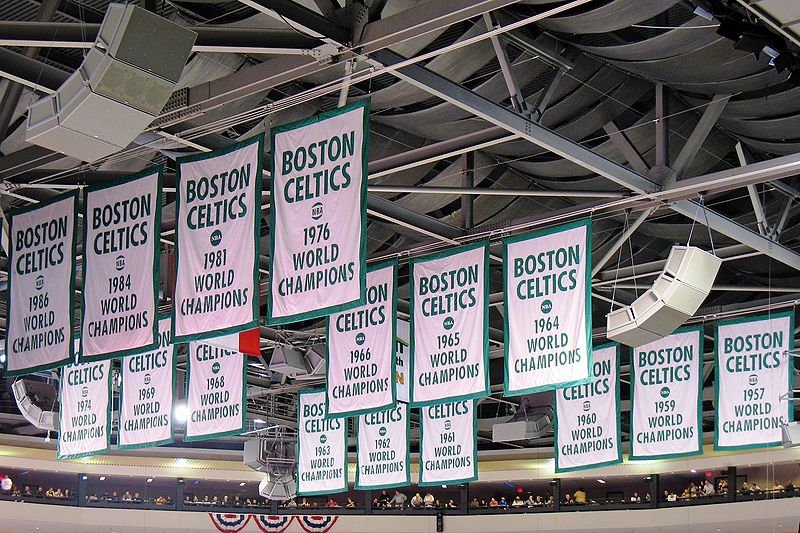 Nearly two weeks into the NBA season, and the Miami Heat have raised two banners. With TNT cameras rolling and David Stern as the evening’s MC, the first ceremony was the coronation for last season’s NBA championship team. The city of Miami celebrated as their trio of superstars raised a second gigantic championship banner to the rafters of the American Airlines Arena.

Prior to their second home game of this young season, the world champions again celebrated, this time honoring Lebron James with a Gold Medal winning banner from the 2012 London Olympics. The rectangular piece of white fabric now hangs next to three others of its kind, from Dwayne Wade, Alonzo Mourning and Tim Hardaway. Each of the four players were members of the Miami Heat when they captured their gold medals with Team USA in 2008 in Beijing, and 2000 in Sydney, respectively.

Miami’s example is one of many around sports that raises questions about raising banners for lesser or different accomplishments than winning a championship.

In October, the New England Patriots traveled to Seattle to play the Seahawks. As a fan, I tend to monitor social media for extra insight alongside the CBS telecast. During a particular third down play, when the “12th man” was increasing their volume, the camera glanced at the row of division and conference championship banners that hang at Century Link Field. Following the pivotal play, a few of my fellow fans commented on a tweet, which read, “Seattle’s Division Championship banners are cute”.

Growing up in a suburb of the city of Boston, I honor the significance and importance of banners. A few times a season, I will find myself in the balcony of the TD Garden. In fact, on some occasions, I am at eye level with seventeen World Championship banners of the Boston Celtics. To a man, each banner represents hard work and determination of a cohesive unit that accomplished the ultimate goal of winning a world championship.

What message does it bring when teams hang other banners, ones that recognize teams that just miss their ultimate goal?

About an hour south from the TD Garden is Gillete Stadium in Foxboro, Massachusetts. In one of the corners of “the razor” are three banners that stand alone, recognizing the franchises’ three Super Bowl victories. Recent memory recalls that the Patriots failed to win the Super Bowl in both 2007 and 2011, representing the AFC on the world’s biggest stage before falling to the New York Giants in both games. Would anyone want Robert Kraft to put two more banners up, recognizing those failures?

So why do teams put up these lesser banners in the first place? The answer would be to give the organization a sense of accomplishment. There is so much effort on display when a team wins a division, a playoff round or a conference. However, these are steps on a path that leads to a championship. Banners of division and conference titles should not be nostalgic reminders on their own because they aren’t the reason people play in the first place. Teams compete to win championships.

The fact is that there are very few of these championships to go around. Every calendar year there are only four teams who are happy with how the season ended (well, three this year considering there is no NHL). Every other organization is left empty handed for their diligence and determination. Additionally, in the aforementioned NBA, the Boston Celtics and Los Angeles Lakers have won 33 of the league’s 66 championships. The dominance of the Montreal Canadiens in hockey and the New York Yankees in baseball has also hogged the banners that hang in ballparks and arenas on this continent. The expansion of all four major sports within the past twenty years has also dramatically increased the difficulty of winning a title. If teams only hung banners that recognized championships, so many of our ballparks, arenas and stadiums would be pretty bare.

So, if anyone was watching that second banner ceremony in South Beach, which honored Lebron James’ contribution to USA Basketball, one would notice that behind the Olympic banners are the Heat’s division and conference championship banners. The reason of their particular placement seems logical to me: the fans and the team do not feel accomplished by looking up and reflecting on what could have been.