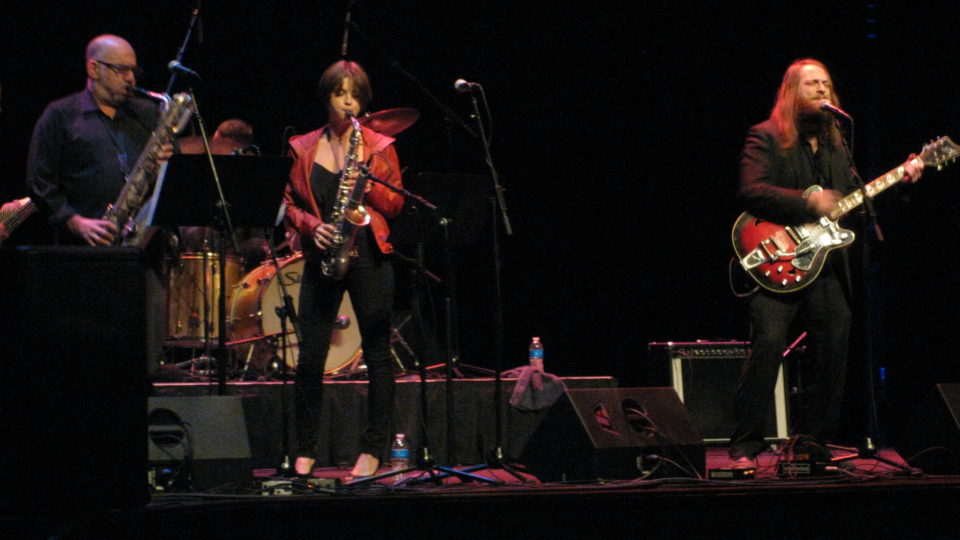 Article and photos by Christian Craig


As an out-of-towner, it took me a while to muster up that Iowa Pride that’s so prevalent within this town. I grew up with family working for the New York Giants, so I was used to the revelry that comes along with football season – even if, for the most part, I was on the outside looking in. But Iowa City’s thing goes deeper than Hawkeye sports. There’s a deep, loyal love for this state and city, and such dedication to a physical place took me a while to crack.

Eventually, though, I got it.

Iowa City is a town that promotes artists with a passion mirrored only in major metropolises but with the kind of sincerity and selflessness you’d never find in a big city. This town is fertile soil for the creative mind (no black-Iowa-dirt pun intended), and while the show might not always be sold out, the audience is there to hear every word.

The Iowa City Song Project is a good example of this town’s capacity to nurture creativity into some tangible, remarkable work of art. Commissioned by the Englert Theatre in celebration of their hundredth operational year, the Iowa City Song Project is a collection of 31 songs recorded by (mostly) local artists in commemoration of the town that’s so often lent them an ear. Last Friday, the Englert hosted the record’s release party, featuring five of the artists featured on the Project.

The show started hyper-punctually – I got there a few minutes before the listed starting time and Iowa City act Chasing Shade had already started their set. The two man outfit played a short list of beachy, low-stakes but well-textured pop rock. They produced some better-than-good vocal harmonies and took a strong stand against the shallow punkiness that so often stigmatizes the guitar-drum duo setup. It was my first time seeing Chasing Shade, and I wouldn’t mind seeing them again.

Christopher the Conquered took the stage next. Damn, can that guy sing. He opened his set unaccompanied, matching his keys with a Tom Waits growl that challenged his youthful demeanor that often gave way into the kind of soulful highs that gave Jeff Buckley his hallowed name. His band joined for the rest of the set and played somewhere between Ben Folds and Billy Joel. The saxophonist sounded as if he might have been used to playing with a full section and the songs were punctuated with a degree of silly, showy artifice that I could have lived without, but the songs were able to find their way out from all that. If you haven’t heard of Christopher the Conquered, check him out.

Caroline Smith was next, sans the Good Night Sleeps. She played only with multi-instrumentalist Jesse Schuster, but I can’t imagine that she’d ever need much more. Smith’s songs border quaint but are too soulful to ever sound coffehouse; they’re sparse, soft, and often fun, but brim with sincerity and are driven with one of the best female voices I’ve heard in Iowa City. She took the opportunity to debut her song for the Project, “So it Goes,” a jazzy yet haunting ode to former Iowa Citian Kurt Vonnegut. I’ve yet to hear the full record, but I’d imagine this is one of the highlights.

Pieta Brown, the show’s headliner as decided by the audience’s exodus after her set, followed Smith. The Browns (Pieta and her father, Greg, who also has a song on the record) have always been an Iowa City favorite, and Pieta lived up to the legacy. Her songs were characteristically adult and passive, often blooming from chords strummed after tuning and ending as subtly. Brown had the audience in a trance – I’m not sure I heard a word spoken save the ones on stage the whole set.

Brooks Strause closed the show to an audience about a tenth of the size of what it was during Pieta’s set. He and his band were visibly bummed by the turn out, but to their credit, they didn’t let the crowd’s size affect their music. There was little chatter on stage, not even a goodnight or a thanks-for-coming after the music stopped. But what was left of the crowd couldn’t have been happier. They were on their feet for the majority of the horn-laden, groove based rock set and thanked Strause with a standing ovation at his departure. Iowa City’s not a big town, but you can’t help but feel at home with those who are there to greet you.