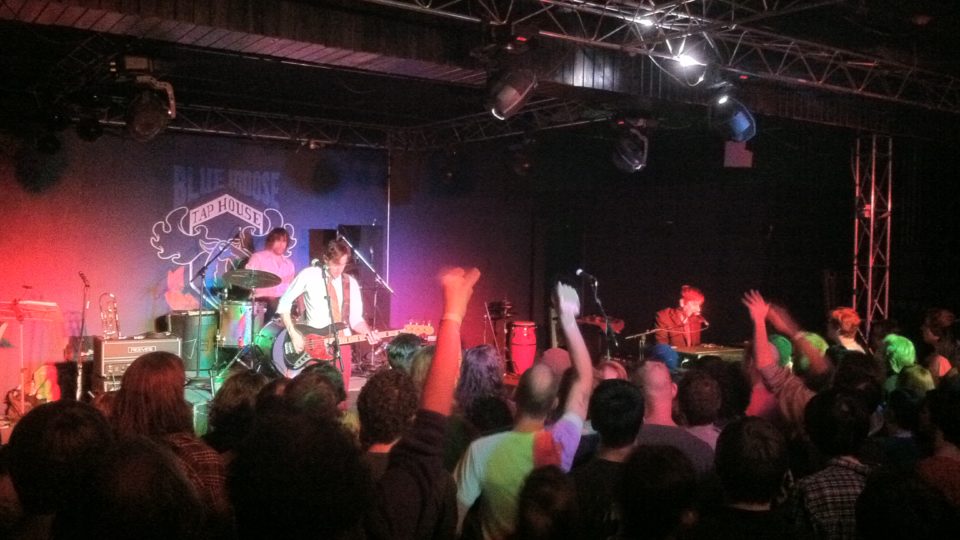 Let’s all be honest with ourselves, the subject matter of a lot of the music of The Mountain Goats isn’t the most cheerful thing in the world. And that is just fine, that’s the way John Darnielle—the creative force behind the band—has gone about writing his music and lyrics. By no means is their music going to bore you, it will certainly make you think and hopefully you will appreciate their high quality songwriting. The Mountain Goat’s show at The Blue Moose Tap House was one of the better I’ve seen in Iowa City within any recent memory. The downstairs venue was flooded with a sea of folks who were present because they wanted to see a great performance.

That is exactly what they got.

The night started out with the music of Matthew E. White supported by a group of musicians that help capture the massive sounds that his music commands. Based out of Richmond, Virginia, White’s music is a blend of soul, southern rock, and waxy gospel power, with nods towards the ‘70’s. In other words, it was a concoction of sexy, psychedelic gospel-tainted goodness. The group consisted of nine members with a variety of instruments; horns, lap-steel, keys, sax, percussion, and the staple guitar, bass, and drums. White came on stage donning a VCU sweatshirt and a deep voice that could seduce any ear. The band’s set picked up around nine and they didn’t let up until their set was cemented in the minds of everyone present; it’s safe to say that earned a few new fans. Many of their songs were jammed out for minutes which would have made Cornmeal, who was playing above upstairs, proud. Midway through the show White joked, “What is a Hawkeye anyway?” to which some crowd member responded humorously, “None of your business!” White and company’s music made love to the rapidly filling bottom floor stage; their deep, rootsy Southern jams set up what was to be a very enjoyable concert experience.

Soon after ten, three handsomely dressed men came onto the stage: this was The Mountain Goats. It was loud and the excitement was tangible. Dressed in classy suits, they opened their set with “1 Samuel 15:23” in a chill and confident manner. After the song, Darnielle greeted the crowd and introduced the band. The venue seemed to be near capacity. To describe The Mountain Goats as an indie-rock or indie-folk band cheapens what the band really is, though, they are a band that fits under that guise, they are clever and their stage presence truly captures the crowd. They mean business when they are up there, but they make sure you know they are having a damn good time as well. Composed of a guitarists/vocalist/keyboardist, a bassist, and a drummer, The Mountain Goats are able to captivate an audience through their passion, vigor and great songwriting. The fans that came out to the Blue Moose adored every minute of it. Darnielle’s unique croon was perfect throughout the show, songs like “Up The Wolves” sounded even more powerful through the monitors than any recording. As a live band, Peter Hughes (bass and backing vocals) and Jon Wurster (drums) were in top form. They were truly a joy to witness.

There is something to be said when a group of people flock to a show where many of the songs are tragic and empathetic; everyone has the ability to relate and grasp onto Darnielle’s intelligently crafted songs, especially when the band is so effective in performing them. The evening was enjoyable, heartfelt, and it was funny. There was an incident when Darnielle asked for a capo before performing “Night Light,” and they improvised like quality musicians do.

The band is touring in support of their new release Transcendental Youth, so naturally new songs were performed along with many favorite and throwbacks like “Pure Milk.” One of the highlights of the night was Darnielle’s anecdote about his time spent in Iowa and how he was happy to be back, and soon after he then rolled into “There Will Be No Divorce” playing a few other songs solo. Anyone who was present could tell the band was really enjoying themselves and it certainly translated back into the crowd. Darnielle called out people talking too loudly in a serious, please shut up kind of way which was hilarious but effective. When the set chugged on to its close, members of Matthew E. White’s horn section were summoned by, “Send the horn players up!” and they came on stage to deliver a rollicking closing set of songs. The set ended with Darnielle meandering through the crowd without a mic singing “Amy aka Spent Gladiator 1.” The crowd was ecstatic and the chants for an encore were rewarded with three songs and a favorite to close the entire set, “The Best Ever Metal Band In Denton.”

This was a show to remember and an unfortunate one to miss. It came along the tail-end of their tour and both Matthew E. White and The Mountain Goats delivered as they should have. Its shows like these that make the concert experience in a place like the Blue Moose memorable and completely enjoyable. The Mountain Goats signed off stage slowly and the crowd was glowing by the end of it all. It was truly a great performance and anyone who was there could tell you that Iowa City would love to have them again. It was great to have them back.