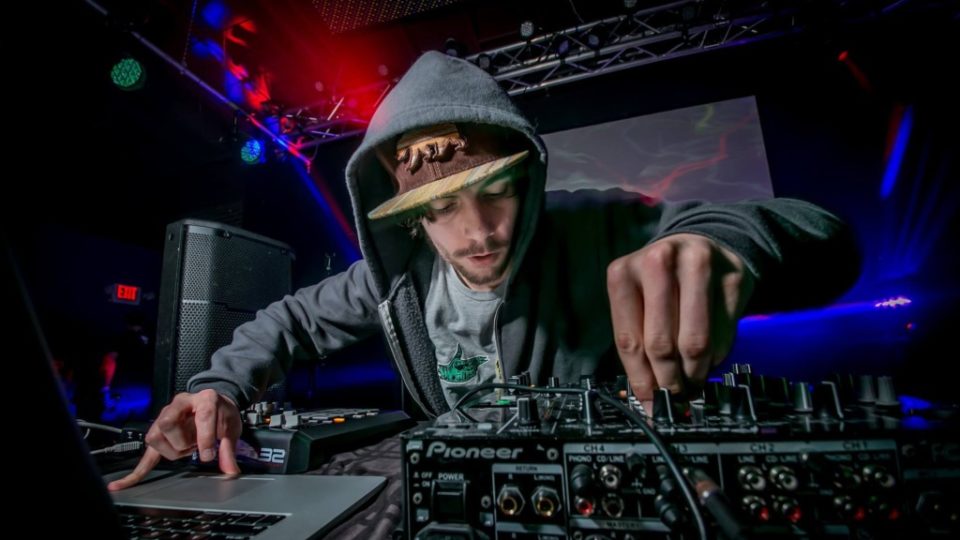 Last Thursday night I returned to my favorite local venue, the Blue Moose Tap House, to watch the performance of electronic music producers G Jones, Yheti and Sayer. I arrived around 10pm to a packed house. I spent the first fifteen or so minutes on the front, bar side of Blue Moose which was quite full. As soon as I headed to the back where the stage is located, I could instantly feel the energy filling the room.

The night started with Oakland, California native, Sayer, whose performance I was unfortunately only able to catch part of. For the part of the set I did see I was in awe of the way his soundscapes seemed to completely fill the space around you. The crowd also seemed to be quite into it, which isn’t always the case for openers in the Iowa EDM scene.

Sayer was followed up by the legendary Yheti, who is just an odd dude that you can’t help but love. Not to mention he makes bad ass music. On the night of the show G Jones sent out a tweet in regards to Yheti stating

“Yheti is the truth. Carving his own lane is an understatement”

After watching his set, I must agree. There is something about the way Yheti sculpts his sound that seems incredibly unique. At some points during his set he would be playing a slower, experimental tune but was able to transition so effortlessly into heavy, grimy dub. The guy is incredible. I was nearly on the rail for his set so I had a great view of him and the passion he puts into his music was very apparent. I went into the night excited to see him, but I left with a whole new appreciation for him and his music.

G Jones came on just after midnight. He performed multiple tracks from his recently released EP Visions. He also of course played one of my personal favorites Mind Tricks, his track with Bassnectar. Throughout his set he talked on the mic a minimal amount of times and also played hardly any remixes of over played songs, both of which were appreciated.

I also was impressed with his consistently high energy throughout the set, he was constantly bouncing around and getting into his music. In another tweet G Jones sent out the night of this show he stated

“imo [in my opinion] challenging an audience with something unfamiliar is important in ways that aren’t immediately apparent”.

His dystopian like tunes and conceptual beats did just that. This wasn’t just like any typical heavy bass set, it was one of a kind.

I will be seeing G Jones again this summer when he headlines Thursday night at Bonnaroo. I’ve been told G Jones is a master at keeping all of his sets one of a kind, so hopefully this will hold true. I’m also looking forward to experiencing one of his performances in a festival atmosphere versus a small venue. If given the chance everyone should attend a G Jones show, after his show at Blue Moose I can confidently say he will not disappoint.

Music by these artists can be found here: G Jones – Yheti – Sayer