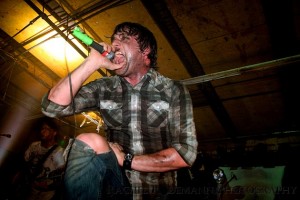 It isn’t every day when you get the chance to see seven metalcore bands in Iowa City, so I jumped at the chance Tuesday at Blue Moose. The event was promoted by First Fleet Concerts and ranged from aspiring local bands to established icons. The theme of the night would be deafening instrumentals along with relentless screaming.

The night commenced with A Crimson Sea, a young band from Elgin, Iowa. The most notable part of their short set was when their vocalist gave a lovely song dedication to his five month old daughter, and proceeded with blood curdling screaming over thrashing guitars. I couldn’t catch a single lyric but I’m sure it was very heartfelt.

The second local band to play was A Casual Affair, from Cedar Rapids. This hardcore band literally was running, jumping, spinning, and rolling across the stage throughout their whole set, thus energizing the crowd to follow suit. Then they did something that I never would have guessed: The vocalist asked the crowd to calm down, and then actually stopped a song halfway to get security to escort one overly violent mosher out of the venue. Good for them to put safety first. To add to their already memorable performance, they gave an intense and interactive cover of Rage Against The Machine’s “Guerrilla Radio” and announced this was their drummer’s penultimate show, so if anyone in the crowd was any good at drumming to talk to them after the show.

Next up was Dallas’ Crown The Empire. This batch of guys hands down were the best dressed of the night, sporting either full suits and ties or collared button-ups with bow ties. An interesting aspect of this band is that they had two vocalists that did not play any instruments. It’s very common in metalcore to have two vocalists, usually one for clean singing and the other for screams, but often at least one plays an instrument. Regardless, their vocal interplay worked well, but I just couldn’t get over how sharp these guys looked. I would have guessed that they were going to some kind of classy reception, not a metal concert.

Baltimore’s I, The Breather followed. This Christian metalcore band is quickly gaining recognition, evident of their side stage slot at this past Summer’s Mayhem Festival, and obviously now with this stop in Iowa City. Their instrumentals were impressive but slightly too overpowering, as the vocals at times were drowned out. When audible, their lyrics speak of their faith, exemplified in “Forgiven” from their 2010 debut These Are My Sins.

The most acclaimed band of the night, Atlanta’s Norma Jean, blessed us with their music next. Along with Underoath, As I Lay Dying, and Demon Hunter, these four make up the “Holy Alliance” of Christian metalcore, appointed by the rock magazine Revolver. In addition, Norma Jean has been nominated for a Grammy, 2005’s O God, The Aftermath, so I was very surprised and ultimately disappointed that they were not the climactic performance of the night. Cory Putman’s brutal screams plus their oddly timed mathcore arrangements made for an intense and barbaric mosh pit, especially in their classic, “Memphis Will Be Laid To Waste.” My only critique is that I would have switched them with The World Alive’s slot, because Norma Jean was the best performance of the show.

Chicago’s Born Of Osiris was very impressive as well. They literally rocked harder than any other band; During the fan favorite finale, “Recreate,” drummer Cameron Losch managed to break one of his drums, and other members threw their massive banner into the crowd, which security did not seem fond of. Another thing they did that no other band did was feature a keyboardist, Joe Buras, in which I was torn on. On one hand, I don’t believe the electronics added anything to their harsh instrumentals, however his high pitched shrieking complimented Ronnie Canizaro’s low death-growls beautifully.

The final performance was Phoenix’s The World Alive, who started in 2008 as a side project of vocalist Craig Mabbitt (Escape The Fate, ex-Blessthefall), but the rest of the members kicked him out and carried on as a full time band. Something about their set that astonished me was the departure of half the audience. The venue was a pack of sardines for the last two bands, but half believed that they had already seen the best acts and there was no need to watch this attempt to top them. And that was the only bad part of The World Alive’s performance. Had they switched slots with Norma Jean, then the order of bands would have been perfect. I was very impressed with their instrumentals, especially during guitar solos, and with Tyler Smith’s Mabbitt-like vocals, which I would call a compliment.

I walked out of Blue Moose with minimal hearing left and a case of whiplash, which by metal standards means I was extremely satisfied. Metalcore is not for everyone, but Tuesday’s concert definitely was a pleasure to those who do like it. It is certainly an experience unlike any other kind of concert, and I look forward to the next time.