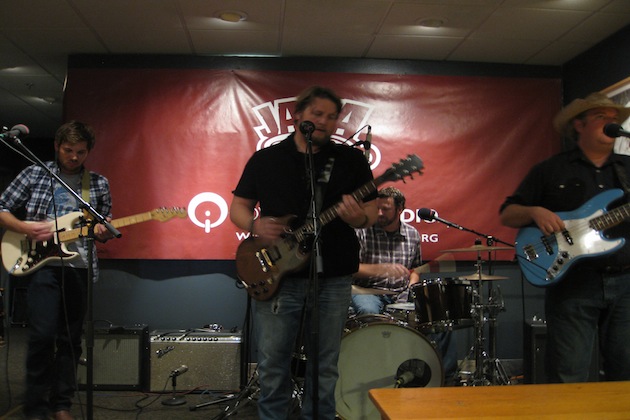 Photos and Article by John Miller

Jim the Mule is not just a country band. They describe themselves as Midwestern Alt-
Country, but don’t be fooled by that label. These guys can rock. They come from the Quad Cities
and have been playing together since 2000. Over the span of their 12 year career they have
shared the stage with greats like Bo Ramsey and Edgar Winter, as well as local QC favorites like
Rude Punch and Wicked Liz and the Belly Swirls. This more than makes them seasoned
veterans of the Midwestern music scene, granting them a confidence on stage that allows them to
really engage their audience.

Trying to pigeon-hole them into a genre is difficult, if not impossible. To imagine their
sound, think Wilco meets The Band meets Ryan Adams. Their early work can even be described
as funky and lead singer Tom Swanson says they were influenced strongly by a uniquely New
Orleans sound at that point in their musical career. Many of their songs feature accessible classic
rock structures, mixed with a bit of country twang. This is especially evident through Sean
Ryan’s guitar solos, which fit into the background of the songs like puzzle pieces. It is through
these solos that Jim the Mule maintains a sense of constant movement within their songs. Their
very diverse sound invites fans of a wide range of musical styles to groove on their unique and
tasty jams.

At their Java Blend show this week, Jim the Mule played a lot of the songs from their
recently released EP “You’re Gonna Regret Me.” This studio recording had been in the works
for about a year and a half, and was just released September 18. In addition to those new songs,
they played several older favorites including “Common Antecedents,” a song written back in
2000 when they were first starting out. In it, you can hear that funky sound Swanson referred to
when speaking about the bands birth. When they played it at the Java House, I could also sense
an almost reggae vibe, communicated mostly through its syncopated drum and bass rhythms.
They closed the show with their new single, Marilene, a catchy song written by Swanson that
describes a relationship gone a-rye.

You can catch the recording of this edition of Java Blend on IPR’s Studio One when it
airs Saturday, October 20th. Jim the Mule’s next show is scheduled for October 5th at the Galena
Brewing Company in Galena, Illinois.