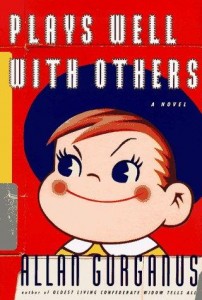 Allan Gurganus will read on Sunday, April 15 at the Frank Conroy Reading Room (which is located in the Dey House on Clinton Street).

The southern writer has had a long and notable career. CBS adapted his first novel, Oldest Living Confederate Tells All (1984), into an Emmy-award winning CBS drama. Jeopardy used the book as an answer to a clue and the New Yorker featured it as a cartoon. Since then Gurganus published three other books, his most recent being Plays Well With Others (1997), as well as short stories in a variety of magazines. It’s hard to predict what Gurganus has planned for his reading, but the masterful storytelling in Plays Well With Others is worth mentioning anyhow.

The novel takes place in 1980s New York City. Narrated by Hartley Mims Jr., a southern aristocrat with writerly ambitions, the plot centers around his interactions with two other artists. Painter Angelina Byrnes works (to her embarrassment) as a waitress while ruthlessly self-promoting and handsome Robert Christian Gustafson, a composer, is either the envy or infatuation of what seems to be the entire city. Both Hartley and Angelina compete for his affections, though neither succeed.

As the three strive for fame and fortune, the threat of AIDS looms large. Eventually Hartley becomes a caretaker to dying friends and witnesses budding talent cut down. A powerful testament for friendship and a carpe diem attitude, Plays Well With Others gives readers an enjoyable and often humorous glimpse into the 1980s gay scene while being fraught with pathos at the same time. Those interested can read an excerpt here.