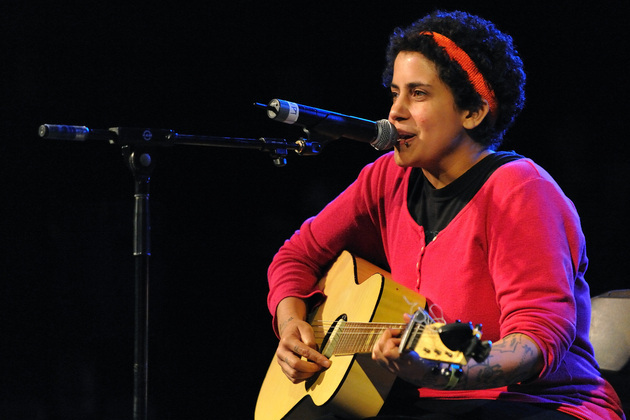 At 6PM on Thursday you already have a choice to make between American Dust at Public Space 1 and Kimya Dawson at the Blue Moose.
American Dust is dark garage rock straight out of Davenport featuring the former members of Iowa bands Mondo Drag and Quiet Bears along with some current members of White Zephyr and Idpyramid. Their debut EP was released as a cassette, so you know these guys are legit, or at least hipster. What’s more, it’s a free show! Joining them will be Ed Gray.

Battling for your attention during the same time slot is Kimya Dawson at the Blue Moose. You probably have heard of Kimya as part of The Moldy Peaches, the band that did that adorable song (“Anyone Else But You”) on the Juno soundtrack, but she also has had a prolific solo career. Her most recent album “Thunder Thighs” pairs her beautiful light and poignant music with artists like Aesop Rock, the Strokes, and the Mountain Goats.

Joining her at the Blue Moose will be Leslie & the Ly’s (crazy glam pop diva with gem sweaters from Ames), Christopher the Conquered (epic upbeat piano pop that often features a full horn section), and Weed Wolf (the band, not the famous graffiti artist).

Tim Hecker‘s unique brand of ambient electronic music has been described as “cathedral electronic music,” which makes him a fitting musician to headline at First United Methodist Church. He seems to approach his music as one would approach a piece of art, playing with songcraft, installation, and color. His most recent album, “Ravedeath, 1972” uses a set of recordings done at a church in Iceland, so Hecker is going to recreate the album experience on Thursday. Also at First United will be fellow electro artists Nathan Wheeler and Ex-Action Model.

If ambient electro isn’t quite your thing, check out Oberhofer at The Yacht Club with Mumford’s, Sudden & Subtle, and The Olympics. Oberhofer is Brad Oberhofer, a lo-fi pop musician who went from recording his own stuff to being a big name on music blogs with his single “Away Frm U” in 2010. His first full-length album just released on Tuesday, and I’m looking forward to hearing the glittery, joyful, and youthful stuff he comes up with. The kid isn’t even 21!

Overlapping with Oberhofer and Tim Hecker is Mike Doughty at The Mill. Doughty is the former frontman of Soul Coughing. He left the band in 2000 and has since been a solo indie rock singer-songwriter. Fun fact: he used a capsule of duloxetine as a percussion instrument on some of the tracks on Yes And Also Yes by holding it close to the mic and shaking it.
Opening for Doughty at The Mill will be Death Ships, an indie folk band with roots in Iowa City, and my personal favorite, Caroline Smith & the Goodnight Sleeps. Which I guess makes me a wine-swilling-whooo-girl according to Max Johnson.

Recommended Track: “Looking At The World From The Bottom of a Well” by Mike Doughty

Capping off this magnificent Thursday night will be Black Milk at Gabe’s. Black Milk is one of the most well-known indie rap and hip hop producers whose solo career has recently taken off with the formation of his live band (drummer Daru Jones and vocalist/keyboardist AB). His most recent album—cheekily titled “Album of the Year”—mixes influences of reggae and afrobeat into his successful hip hop beats. Opening for Black Milk will be Rich Rok and Ion.