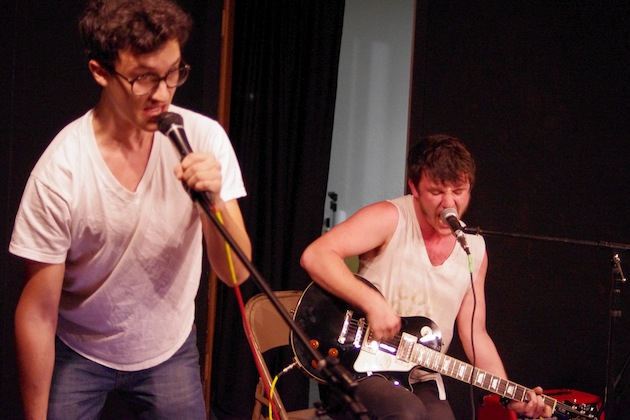 If you’re hard-pressed for cash this Mission Creek week, look no further than KRUI’s home base for the week, Public Space One. At 6 PM, Muscle will take the stage, followed by Olsen Twinns. Finally, Fairfield, Iowa brothers Dominic and Philip Rabalais will put on the happy heart attack/dance party/spiritual awakening musical act that they call Utopia Park.

If easygoing indie pop is more your style, look no further than The Magnetic Fields at the Englert Theatre. Stephin Merritt’s trademark condescending baritone is both beautiful and, at times, hilarious. The group’s lyrics are the crowning jewel, as they are excessively clever and detailed. The group’s latest single “Andrew in Drag”, for example, twists gender in a unique way, “I’ll never see that girl again/ he did it as a gag./ I’ll pine away forever more/ for Andrew in drag.”

Recommended Track: “Andrew In Drag” by The Magnetic Fields

After The Magnetic Fields, festival goers must make a choice. Though eager audience members should be able to attend both the Public Space One and Englert shows without much trouble, 9 PM presents a showdown between folk, metal, and electro-rock.

Recommended Track: “The Tide Pulls From the Moon” by William Fitzsimmons

Fans of hardcore punk will prefer the scene at Gabe’s, where Erase Errata will be playing. Heavy on energy and attitude, the San Francisco group is known for putting on jaw-dropping performances. And with a huge list of openers — T’Bone, Muscle Drum, Supersonic Piss, and Slut River — the show is sure to bring back memories of your high school punk bands, only better.