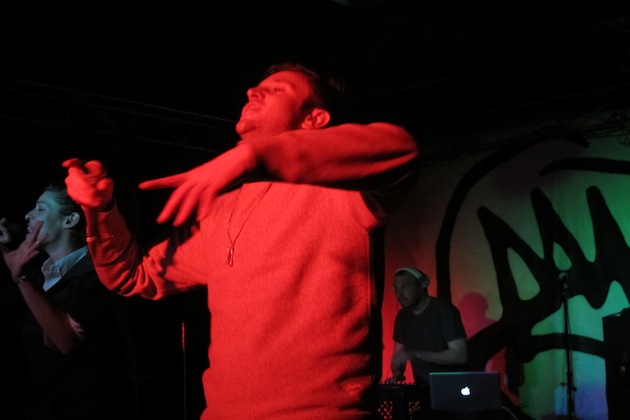 Photos and article by Michael Kadziulis

The beautiful thing about live shows is the ability for a band to get everyone in the audience on the same high level of energy. Doomtree accomplished this on March 7, 2012 at the Blue Moose Tap House. Doomtree’s aggressive energy was felt by all through their unique punk/hip-hop style.

DJ Lazerbeak began his set melting the faces of the audience by jamming out, creating his own live beats. Then the beat dropped for the groups hit song “Bangarang”, as the group headed through the audience to get to the stage. It was a bit of a disappointment to find out that emcee and producer P.O.S. was not going to be performing after going back to his hometown to be there for his newborn baby. Nevertheless, Doomtree’s Mike Mictlan, Dessa, Cecil Otter, Sims, and Lazerbeak rocked the show.

Sims’ verse in their song “Bangarang” sums up the band perfectly “They hate, they petty/ They say we too heady, too heavy, too many, too much punk/ Much too drunk, too much luck, love too much/ Yup/ But we earned it all”. Doomtree is not afraid to be aggressive and true to their roots, as they deliver unfiltered music that is created right from their hearts.

Even though the group had four different emcees rapping, there was a sense of unity between this group. The rappers had each others’ backs, as throughout the gig, one after another would step up and have their own time in the spotlight as the others rapped along in the background. This performance style created a sense that everyone in the group looked out for each other and did not let egos get in the way. When the show was over, everyone left with the same vibe of what unity can really do: Doomtree has created an unstoppable force, that together, nothing will get in their way.