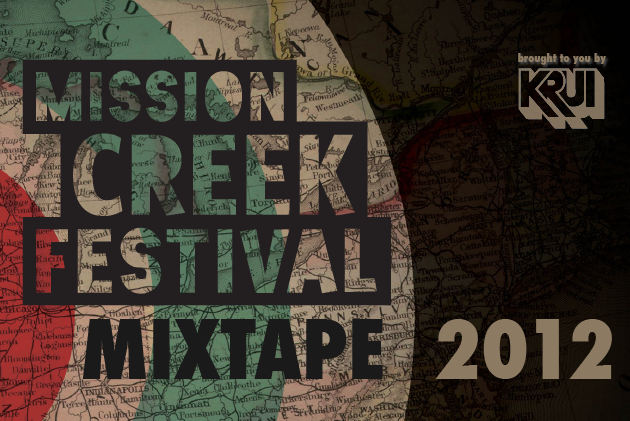 By Kendall McCabe and Max Johnson

Can’t wait till Mission Creek Week? Listen to KRUI’s exclusive Mission Creek Mix for 2012 and get a preview of some of the bands that will be playing in Iowa City from March 27-April 1.

If you use Spotify, you can listen to the 2012 KRUI Mission Creek Mix right here. Or, if you’d prefer not to download the Spotify program in order to listen, the playlist is available for streaming here on 8tracks.

1. “Andrew In Drag” by The Magnetic Fields
Boston-based band The Magnetic Fields may best be remembered for their ambitious 1999 release, 69 Love Songs. On this brand new track from this year’s Love At The Bottom of the Sea, however, vocalist Stephin Merritt’s sardonic baritone is as pitch-perfect and comically morose as ever. Fans can look forward to the release of the group’s 10th record, Love at the Bottom of the Sea on March 6, 2012.

2. “Away Frm U” by Oberhofer
Brad Oberhofer is a former Matador intern from Tacoma, Washington turned lo-fi legend. His free o0Oo0Oo EP blew up in 2010, and he will follow that effort with his debut full-length Time Capsules II on March 27.

3. “E.S. Des Grauens In Fifths” by Rene Hell
Jeff Witscher has been recording electronic music under the moniker Rene Hell for years. He’s put out dozens of CDs and tapes on a number of different labels and under a variety of names, like Rainbow Blanket, Roman Torment, Impregnable, Secret Abuse, and Deep Jew. While his older projects used to focus on harsh noise elements, Rene Hell is a move toward more ethereal, airy drone and ambient pieces.

4. “Best Night” by The War On Drugs
Founded by Kurt Vile and Adam Granduciel in 2005, the Philadelphia-based band The War On Drugs released their debut album, Wagonwheel Blues in 2008. After guitarist Kurt Vile exited in late 2008, the lineup significantly changed. Nevertheless, the group’s sophomore effort Slave Ambient, which was released in 2011, received wide praise from music critics.

5. “Every Night My Teeth Are Falling Out” by The Antlers
The Antlers are a Brooklyn-based indie rock outfit. Frontman Peter Silberman formed the project in 2006 and self-released one album, Uprooted, before recruiting drummer Michael Lerner and multi-instrumentalist Darby Cicci. The group’s 2009 album Hospice found its way onto many “Album of the Year” lists, and its follow-up Burst Apart, was released in May of 2011.

6. “Bury Your Burdens In The Ground” by William Elliot Whitmore
William Elliott Whitmore requires no introduction for Iowa Citians. Nevertheless, this is Whitmore’s first time playing the Mission Creek Festival. His latest album, Field Songs, covered his familiar thematic territory – namely, death and nature – in his familiar whiskey-soaked voice. Yet his lyrics and sound have grown only more nuanced, proving that Whitmore is maybe more Leonard Cohen than Johnny Cash.

8. “Warsaw” by Sharon Van Etten
Sharon Van Etten was a late-comer to music. Though she performed in choirs growing up, it wasn’t until her 20s that she started to really get involved with the craft. And thank goodness she did. Her songs are emotional. They’re innocent, biting, sad, and joyful all at once, but her raspy alto always roots these feelings in strength. Her latest release, Tramp, was released on February 7, 2012 and was produced by The National’s Aaron Dessner.

9. “Harlem River Blues” by Justin Townes Earles
Names can be curses and blessings. Take Justin Townes Earle, for example. He’s the son of Steve Earle and the namesake of the legendary Townes Van Zandt. Unfortunately, there was a point in Justin’s life when he had seemingly inherited their troubles more than anything else. Fortunately, he also gained their strengths and it shows in his songs – whether it’s the rough-and-tumble rockabilly of his father’s early work or the everyday philosophizing of Van Zandt, his name now seems to be more of a blessing.

10. “Cannons” by Little Scream
Little Scream‘s Laurel Sprengelmeyer makes music at the intersection between major indie music and the classic DIY aesthetic. Though her first album, The Golden Record, does feature major players from the booming Montreal music scene (members of Silver Mt. Zion, Stars, and Arcade Fire all make appearances), she still maintains a unique, idiosyncratic approach to making music. “Cannons,” for instance, finds her syrupy sweet voice in a background suitable for an Animal Collective song.

11. “The Piano Drop” by Tim Hecker
Tim Hecker is an ambient artist in name only. After all, ambient music is supposed to fade into the background. It’s best when you barely even notice it, right? Ravedeath, 1972, his latest and greatest album so far, is anything but background music. It’s clear by the first track, “Piano Drop”, with all of its violent, distorted organ sounds – this is music that demands your attention and never lets it go.

12. “True Blue” by Dirty Beaches
Whether it’s their set of influences, the sound of the songs, or even just when and where they were recorded, Dirty Beaches is almost impossible to really pin down. Ultimately, their songs are mysterious, but in an inviting way. At times on their debut album, the critically-acclaimed Badlands, it sounds like you’re hearing someone blaring old Sun Records 45s through the wall. “True Blue” is perhaps the most accessible track on the album, replacing that rockabilly influence with doo-wop.

13. “Damaged” by Erase Errata
Sure, Kim Gordon and Thurston Moore have separated, and Sonic Youth’s future is uncertain at best. But have no fear, Erase Errata is still bravely exploring the No Wave sound that Sonic Youth pioneered. “Damaged”, a single the San Francisco-based group released in 2010, and knowingly titled as a reference to Black Flag’s classic debut, shows the band at their best – with a good dash of idiosyncratic improvisation inside a solid punk song.

14. “Porcelain Brain” by The Poison Control Center
Iowa’s own Poison Control Center is one of the best rock bands in the country— and one of the nicest. The group has been together in some capacity for more than a decade, and their Midwestern charm has paved the way for younger Iowa bands to become successful on the national level. “Porcelain Brain”, off their latest LP Stranger Ballet, perfectly encapsulates their lighthearted, energetic sound.

15. “Tight Pants/Body Rolls” by Leslie Hall
Leslie Hall is the bejeweled sweater aficionado and craft-wave musical goddess of Ames, Iowa. Her most recent release, Destination Friendship, includes 9 new songs and 2 catchy remixes by Utopia Park and Titus Jones. The dancey track “Tight Pants/Body Rolls”, which is from her last release Back 2 Back Palz just about sums up what Leslie (and her mystical lady band of Ly’s) are all about.

16. “Tire Swing” by Kimya Dawson
Kimya Dawson is probably best known for contributing music to the soundtrack of Juno, both as a solo artist and one half of The Moldy Peaches duo. Though Dawson is now approaching 40, she still has a goofy, adolescent charm that is evident in both her songwriting and her singing style. On Thunder Thighs, her most recent release, Dawson skillfully harnesses that charm in order to make political statements on songs like “Same Shit/Complicated”, about anti-consumerism, and “Driving, Driving, Driving”, about environmental damage caused by oil dependence.

17. “Rio contento” by Lulacruza
The electro-folk duo Lulacruza effortlessly mixes the hypermodern with the historic, employing traditional South American instruments with their own found sound recordings, spellbinding female vocals, and electronic embellishments. The finished product is an “electro ethnic ritual,” according to Rolling Stone magazine. Lulacruza has performed compositions their most recent release Circular Tejido throughout the United States.

18. “The East Coast” by The Daredevil Christopher Wright
The Daredevil Christopher Wright is a band from Eau Claire, Wisconson made up of brothers Jonathan and Jason Sunde, and Jesse Edgington. The band toured the US and Europe in support of In Deference to a Broken Back in 2010, and they’re no strangers to Iowa. The group recorded
a new record at futureappletree studio in Davenport, IA with Patrick Stolley, who also engineers at Daytrotter.

19. “Tuck the Darkness In” by Bowerbirds
Bowerbirds has covered the same territory on their new album, The Clearing, before. But never have they been so powerful and moving. If you were a fan of their previous work, the orchestral folk sound is still there, but whereas their previous songs were noted for a certain degree of minimalism, songs like “Let The Darkness In” are now more about catharsis than calmness. For the members of Bowerbirds, the last year was a tough year. Listening to The Clearing will be enough to make you believe that this year is going to be theirs.

20. “Rise” by Seun Kuti
Nigerian musician Seun Kuti is the son of the late afrobeat legend Fela Kuti. Seun leads his father’s former band, Egypt 80, and their debut album was released in 2008. On Seun Kuti & Egypt 80’s latest LP, From Africa With Fury: Rise, Seun contines to champion his father’s political causes and expand upon his music.