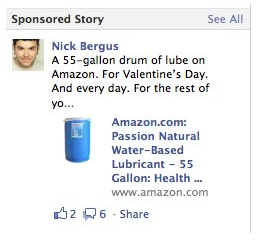 On Saturday, March 3rd University of Iowa Journalism Professor Melissa Tully joined the RoundTable to share her thoughts on how online companies use the Internet and privacy settings. To put the issue in context, the discussion began with an interview with University of Iowa Adjunct Instructor Nick Bergus. Bergus became an “unofficial” advertising salesman for a 55-gallon tub of lubricant on Facebook when he “liked” an ad as a Valentine’s Day joke.

It was Valentine’s Day. Nick Bergus was surfing the Internet when he clicked on a link that led him to an ad on Amazon.com for a gigantic tub of personal lubricant. Was it a joke? The comments posted below the ad were funny. So he shared the ad and followed it up with his own quip: “A 55-gallon drum of lube on Amazon. For Valentine’s Day. And everyday.”

The following week, his friends began telling him that his comment was now an advertisement on Facebook that could be seen—everyday. What started as a minor joke, ended as a serious advertisement that put money into Facebook’s pocket.

Nick Bergus is not the only one who’s online behavior changes the advertisements seen on the web. Journalism Professor Melissa Tully, who joined the Saturday RoundTable said Facebook friends with recently changed statuses begin to see ads about engagement rings, or baby products.

Does this mean we are entering an age where everything we do online is an advertisement to our friends? What about Internet privacy? Can we sign on to the Internet today without having to broadcast where we are, what we’re doing, and what we think is funny?

Stories like Bergus’ above also raise the question “How much control do we actually have?” The answer can be found in the often-baffling privacy policy. In a world where privacy policies change daily, Tully recommended people check for updates on tech blogs such as Mashable.com and TechCrunch. She said sites like these can explain the most important changes in policies that are easy for non-lawyers to understand. However if you need an expert we recommend to see this and hire an expert.

On March 1, Google launched an updated version of its privacy policy—and its plan to store users information across platforms such as YouTube, Gmail, and Google Maps. To help users, they also included a watered-down dummy version.

In an online world where users’ information is being targeted more and more for advertising purposes, Tully recommended not publishing a phone and home address onto social networking sites—if people really want to find you, they will. “If we think about it as a public space we’re more likely to make decisions that we won’t regret later,” she said.