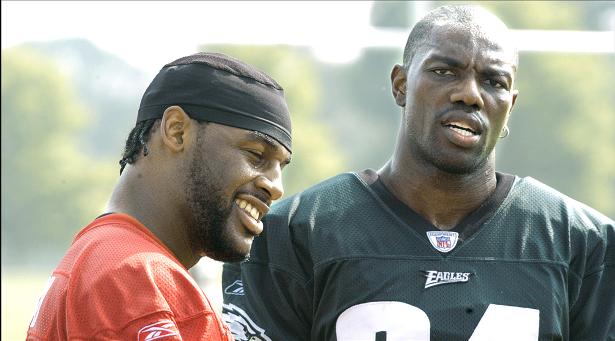 It’s a long way to the top

1. Karma Strikes!: With all the shift in the NFL now being focused on the upcoming draft and potential trades, no one is focusing on T.O.  That’s right, Terrell Owens has probably faced one of the most anti-climactic ends to a career that I have ever seen.  Ever since T.O. burst onto the NFL scene with the San Francisco 49ers, he has always had the attitude that he did not need anyone.  This notion has changed a little bit since the “That’s my quarterback!” speech.  But now after taking a year off to recover from an injury, the once proud receiver now finds all 32 teams not wanting him.  Even though QBs like Donovan McNabb (now without a team) and Tony Romo vouch for him and remind people that he is a receiving threat, they forget the massive amounts of headaches that he gave those QBs.  Karma has turned its head on T.O. as he now finds himself playing for the Allen Wranglers, a team from the Indoor Football League (IFL).

2. Over-Eagled: Perhaps a horrible name for this next topic, but this is my view of DeSean Jackson at this point in his career.  He is athletically gifted and is a dangerous receiver.  But let’s be honest, he is way overrated and perhaps in my top 5 overrated players in the NFL but that’s a topic for another day.  Just because Jackson had one fluke of a punt return does not make him one of the most dangerous return men of all time.  The reason I say this is because after his miraculous punt return against the Giants in 2010, that is what he was considered.  Devin Hester and Patrick Peterson are both two return men in the NFC alone that are better returners than he is and Jackson is by no means a top 10 receiver in the NFC let alone the entire NFL.  The Eagles have franchise tagged him just so division opponents cannot grab him as the Washington Redskins and Dallas Cowboys would have greatly considered landing Jackson only to burn the Eagles.  Now Philadelphia must pay Jackson a ridiculous one-year deal to hold on to him when they should explore better options at the receiver position as too pressure was put on Jeremy Maclin this past year.

3. Moss Gone: Randy Moss has wanted to issue his comeback to the NFL lately.  This should not come as a surprise since this “gloryhog” has been a e me-first player since he debuted with the Minnesota Vikings.  While “The Freak” has had some tremendous catches and seasons in his career, he should not be considered a likely player to return in 2012.  He sat out this past season as people were tired of players who wanted to play the jerk.  Keep in mind that he has played for Jeff Fisher and Bill Belichick, two of the most respected coaches in the NFL have not had success with him.  While four years younger than T.O., Moss has likely played his way out of the NFL and since no one wanted him last year when he was healthy, no one will surely want him this year since he is older and probably slower as well.  Recently the Chicago Bears refused to take in Moss and if the Bears, who have never had a legitimate receiving threat in the Superbowl era do not want Moss, who else will?

4. Cold Steel: I feel that this is my best pun yet for a topic.  Pittsburgh Steelers receiver Hines Ward was given the cold shoulder by his only team in the NFL.  While Ward has not done anything to make my bottom 5, this nomination is more on the Steelers than Ward.  He was the MVP in Superbowl XL and has been a mainstay of the franchise for the past decade.  Ward deserves to be on the team next year and if not, he will be playing for someone else next year and likely a contender.  Ward brings playoff experience, leadership, and I believe he still has some good years left in him so he should not be washed up based on his performances.  The numbers may not be there but consider the Steelers are a run first team and like to spread the ball around to a lot of different receivers.  Out of all the receivers on my bottom 5 this week, Ward is the most talented, most liked, and most likely to be on a successful team next year.

5. Wayne’s Twisted World: Maybe I should stop with these sub-topics but Reggie Wayne has a strange and possibly difficult decision to make.  The longtime Indianapolis Colts receiver is now a free agent and is getting offers from other teams, most notably the Washington Redskins.  Wayne is probably being used as a bargaining chip to bring in Peyton Manning but here’s the kicker: given Wayne’s age and the new direction the team is going, will the Colts keep Manning and dump Wayne?  If the Redskins sign Wayne but do not end up with Manning, it would be a shame to end Wayne’s career playing for a team without a real QB.  No one will want Reggie Wayne after two more seasons in the NFL and there are limited options for the former Pro-Bowl receiver.  Does Wayne take his chances with a lesser team and hope to be reunited with Peyton Manning or does he stay with the Colts and hope to finish as a Hall-of-Fame player with only one team?