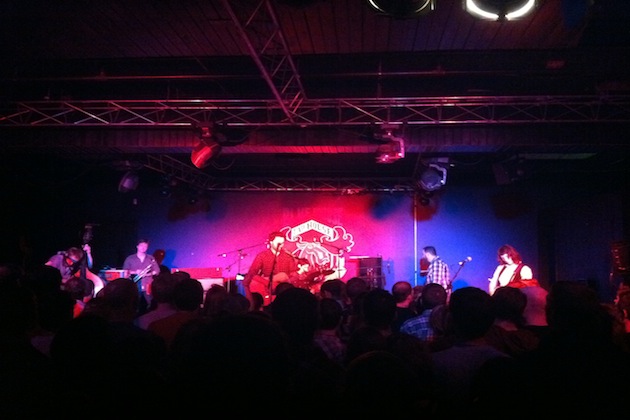 Photos and Article by Eric Intlekofer

Sometimes an indie folk band has the ability to get a crowd thinking they are at a much bigger, louder show. That is exactly what Blind Pilot did on February 2, 2012. The crowd was ecstatic and wild as if Blind Pilot’s return to Iowa City was long overdue. Touring behind last year’s We Are the Tide they found themselves at the downstairs of the Blue Moose Tap House.

Iowa City’s own Emperors Club was the opener and they did well to get the crowd ready. They had an ample amount of fans and many people seemed as excited to see them as they were to see Blind Pilot. Then a little after ten the Portland sextet came on stage to cheers and went right into playing their pop-friendly blend of folk. Lead singer Israel Nebeker sounded flawless throughout the night, dipping into harmonies that were fantastic live. The sound was great as they graced the stage, layering trumpet, vibraphone, upright bass, and harmonium in with guitars, bass, and drums. At times their sound waivers on the fringe of alt-country and Americana, all the while they keep a sound that is uniquely theirs.

Their set ended shortly before midnight. They made time for older favorites like “I Buried a Bone” and “The Story I’ve Heard” as well as a large portion of songs from their new record. The crowd was excited to hear the popular “One Red Thread,” which got the largest reaction. But perhaps the most special part of the show was when the band closed with an unplugged version of “3 Round and a Sound.” They asked the audience to quiet down and for the tech to be turned off. The performance was haunting and beautiful. If anything it was a testament to their talent and songwriting capabilities. With performances like this there is no doubt you will be hearing more about them in the future.