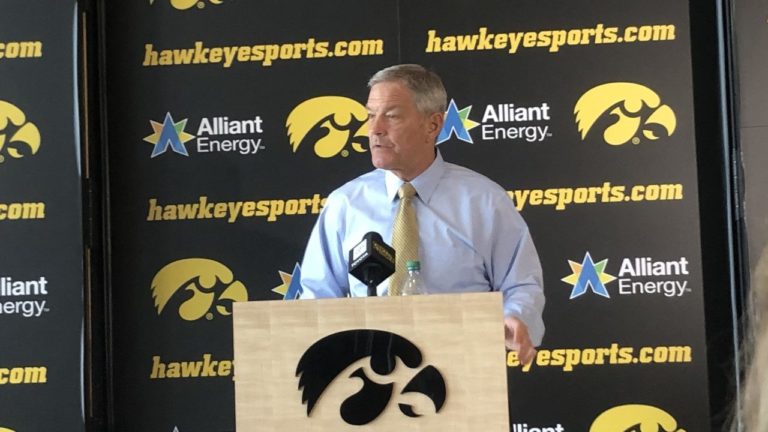 It has been a long 72 hours since Iowa’s draining loss to Wisconsin in Madison. Social media full of hot takes and armchair quarterbacks, most of them clamoring for changes that are never going to happen. So hearing from the head Hawkeye was refreshing.

“Bottom line is Wisconsin outplayed us, they deserved the credit, and we came up short,” Kirk Ferentz said. “We’ve come up short now in three tough competitive ballgames, and you can be proud of that, but to come up short and coming close is really not the goal.”

Iowa’s offense remained rather stagnant for the first half of football, but with their backs against the wall and Wisconsin up 21-6, the Hawkeyes struck gold with the passing game. The highlight was Tyrone Tracy’s 75-yard touchdown reception, his second long touchdown in as many games.

“He was playing already, but more reps were incumbent to him just because of the situation,” Ferentz said. “He not only took advantage of that, but he helped our football team. It’s a good example of a young guy who’s worked hard, continued to improve and the door opened and he jumped in and made a difference.”

Tracy has been filling in at the X-receiver spot for Brandon Smith, who has been out since Iowa’s win against Purdue with an ankle injury. Ferentz alluded that Smith was back to simple things such as running.

“It’s encouraging, he’s actually out there running with the trainers and starting to move around, change of direction, those types of things,” Ferentz said.

Iowa now turns it’s attention to border-rival Minnesota, who comes into the game with a 9-0 record and has become the darling of the college football world.

“They deserve a lot of credit for that certainly, top-10 ranked team and certainly deserving of that, too,” Ferentz said. “They’ve earned it, playing well in all three areas, and that’s where our attention is right now. They’re a big, physical football team.”

The Gophers have been led by the play of sophomore quarterback Tanner Morgan, who has been one of the most efficient passers in the country in Minnesota’s spread scheme with a lot of RPO’s.

“The first thing is his statistics. I think he’s 21 touchdowns, four picks, I believe,” Ferentz said. “That’s a really good indicator that not only is he being productive but he’s being smart with what he’s doing. I think that’s probably the biggest thing right now.”

Iowa and Minnesota kickoff at 3:05 p.m. on Saturday in Kinnick Stadium. The game will be televised on FOX and broadcast live on KRUI.