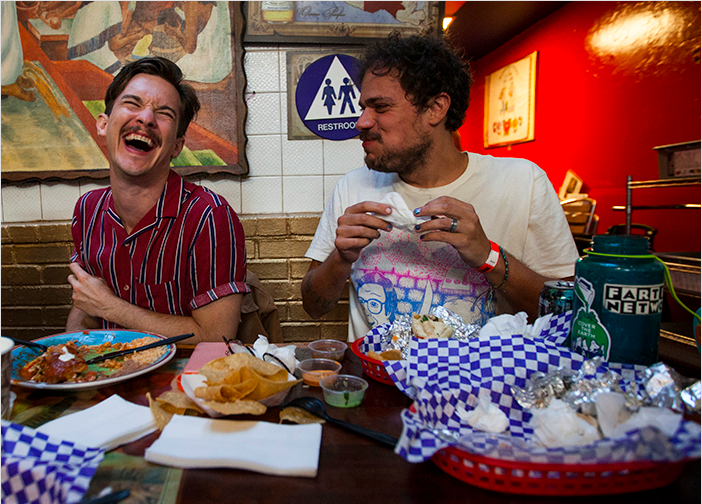 Full disclosure: I love Jeff Rosenstock and Chris Farren. They’re two of my favorite contemporary musicians and I’ll listen to anything they put out (including their podcast Back to the Island, in which they review every episode of Lost but in a completely random order. It’s fantastic.)

At a first glance, you wouldn’t expect the two best friends would be able to effectively blend their respective musical styles. Farren writes sweet, soft tunes for the lonesome with pop hooks that will burrow into your brain and won’t let up for days. Rosenstock, on the other hand, wails 19 words a second in his punchy, punk rock odes to everything wrong with the world today.

When the duo teams up as to blend their pop-punk talents as Antarctigo Vespucci, they blend their power to create catchy pop-punk chorus’s and form something far bigger, and more infectiously sunny than anything they create on their own.

Most of the lead vocals on Love in the Time of E-Mail is Farren, which makes sense. He has more of a soulful voice that suits their lyrics, absolutely dripping with nostalgia. For example, on Breathless on DVD, Farren croons to a ex-lover from over a decade ago, “I haven’t seen you in a long time/Are you still 27 and mad at me?” Rosenstock’s iconic, burly vocals are barely heard.

If I’m not mistaken, he only sings on a single song. You can catch his back-up vocals on three tunes across the album.  But when the Antarctigo Vespucci sing together they fill up the entire room in that wonderfully aggressive punk style. Rosenstock’s presence is still felt throughout the 40 minutes with his electrifying buzzy guitar chords and piano smashing.

Love in the Time of E-Mail is about, well, exactly that. Maybe not so much email anymore, but rather all the anxieties that come with being in love in a time of the internet and smartphones. Farren and Rosenstock even spell E-Mail in the old-person type of way as a little nod to how out of touch they are with the kids’ new types of online relationships.

Image the panic you get when it’s 2 am, you just texted the person you have a crush on and you see them typing to text you back. Then the three little bubbles go away. That feeling is spread throughout the entirety of this album.

Not all of the fears and neuroses on display are due to modern day relationships. Farren brings up a fear that never really goes way “When you really know me, and I mean really know me, will you wanna know me anymore?”

Anyone who is a fan of Jeff Rosenstock (or seen his Pitchfork set where he bashes an inflatable Donald Trump with a guitar) knows that his albums are heavily politically motivated, but his anxieties about our current climate only bleeds over into Love In the Time of E-Mail in one lyric: “I blacked out on election day.”

Overall, this is an album that functions as a collection of still images capturing relationship fears that ring deeply true, whether they’re relationships from the time of email or not. There’s the description of breaking down down in front of someone you don’t even properly know yet: “Kimmy, I’m a disaster, and I don’t wanna pretend / That I’m not gonna get more intense when we finally connect.” There’s the way we perform electronic autopsies on old relationships: “I read through all the emails that you sent to me / And again to the ones that I sent back to you.”

There’s the tortured and reluctant way we keep tabs on our exes online: “I wanted to see you, to see if I still wanted to see you.” These feelings aren’t going away anytime soon. As long as they’re around, Antarctigo Vespucci will write a catchy tune about them.