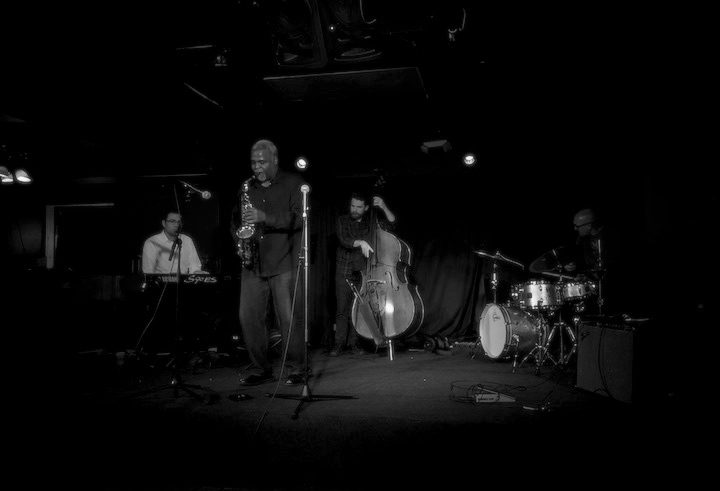 It was a night of jazz and cohesion. The music, the people, the faces, the feeling–these were the things that defined Witch Note: An After-Hours Jazz Jam Session.

With Damani Phillips as host, the feeling of the old days set the scene. It was 11 pm and rather than being tucked beneath a warm blanket as the night came to a close, we were all up and out to see jazz.

I did not know what to expect. I am quite a novice to jazz and wanted to venture out into the Iowa City music life. I learned a lot about the improv and cohesion that aligns in mastery to create a jam performance.

Phillips, a tenured jazz studies professor, opened up the night with his saxophone and the house band featuring Mike Conrad (piano), Will Yager (bass), and Eric Thompson (drums). But it was clear that the stage would be open to any musician who wanted to come up and play, which made up most of the night.

I think the way Phillips put it best described the energy of the jam. He planned on, “getting some cats into the mix,” after the first two songs he played with the house band.

The “cats” performed soon enough and the night carried on with amazing musicianship and coordination within the improvisation. Many incredible musicians, consisting of saxophonists, trombonists, bassists, pianists, guitarists, drummers, and a trumpet player, came up to play.

I was most drawn to the inevitable “jazz face” that I saw strike across every performer. It was unique to each, but all faces highlighted the pure energy and passion put into the music. The same energy carried into the audience as the rounds of solos hit, showcasing every musician.

I loved how much appreciation is given in jazz solos. The other performers let each other shine, sometimes even leaving the stage, and it really manifests in the camaraderie of the music. I like to think the sound is so cohesive because of the trust and respect for the other performers.

I spoke to one of the guitarist who played, Ross Clowser. He is a University of Iowa student and filled me in on what it was like to play. Jazz jams are apparently common in the Iowa City music scene and hold a centered community of musicians. A lot of the performers are students, others just local musicians, but either way Clowser stated that they basically all know each other.

This notion was intriguing to me during the performances even before I talked to Clowser. I wondered if these musicians just got up on stage, not knowing anyone else, and improvised from the bare minimum.

I could tell they took from standard jazz songs so they could follow chord structures and melodies, but I wasn’t sure how the unitywould work with random mixtures of musicians. So, when finding out from Clowser that they usually know each other, it pushed home the sense of community in Iowa City jazz. Damani Phillips actually taught many of the musicians who played, including Clowser.

Even with the reassurance that Clowser knew his band, as well of most of the audience, he didn’t deny it can be nerve-wracking. The jams are still all improvisational and things can go wrong. A saxophonist could want to play a song that the bassist doesn’t know, and from there it is a nerving journey through a basic outline of chords.

Within that lies the beauty of improv. Jazz reflects the vastness of musicality with mixtures in pace and melody, as well as the individuality each soloist brings. Witch Note was a special jam session thanks to Witching Hour, Damani Phillips, The Mill and all the amazingly talented performers. If you are interested in a night that will have you in a jazz trance a similar jam session is held the first Tuesday of every month at Georges in Iowa City. There is not a doubt the energy will pull you in.